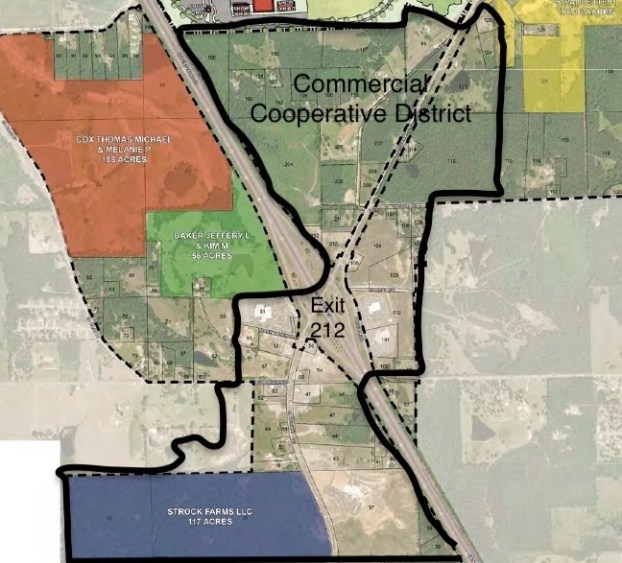 What is a cooperative district?

New tools for helping commercial and economic growth in Chilton County have been forged recently.

These tools will be used to assist in realizing the ideas presented in the Master Plan for the Interstate 65, Exit 212 corridor.

“A year and a half ago, we knew we were creating these districts because we wanted something that was an arm of the city to manage the commercial development,”

(The IDA helped set up the cooperative districts, but the districts are separate from the IDA.)

Creating a cooperative district gives local governments a way to form a smaller board that can work out the details of proposed projects, incentives and fees within the district.

These boards are still required to have their meetings open to the public, except when executive sessions can be legally called.

“All of them are public bodies, so they can do things that public bodies can do,” Barlow said. “They can bond. They can assess fees.”

Barlow said the cooperative districts function as an extension of sorts for local governments, but the appointed board members the local government chooses can be any registered voter in the county.

Any proposed fee or incentive package would go to the governing bodies involved in the project for approval before becoming a reality.

For example, any incentive package or fee the Clanton Commercial Cooperative District wanted to offer a developer would have to be approved by the Clanton City Council.

The Alabama Agriculture and Exhibition Center Cooperative District has appointees from the Alabama Farmers Federation, the Chilton County Commission and the Clanton City Council. Its geographical area of focus is the future Alabama Farm Center at Alfa Centennial Park site. Appointees to this board were selected in February.

The Commercial Cooperative District is a capital improvement cooperative district focused on development of a portion of the Exit 212 corridor in line with the Master Plan. 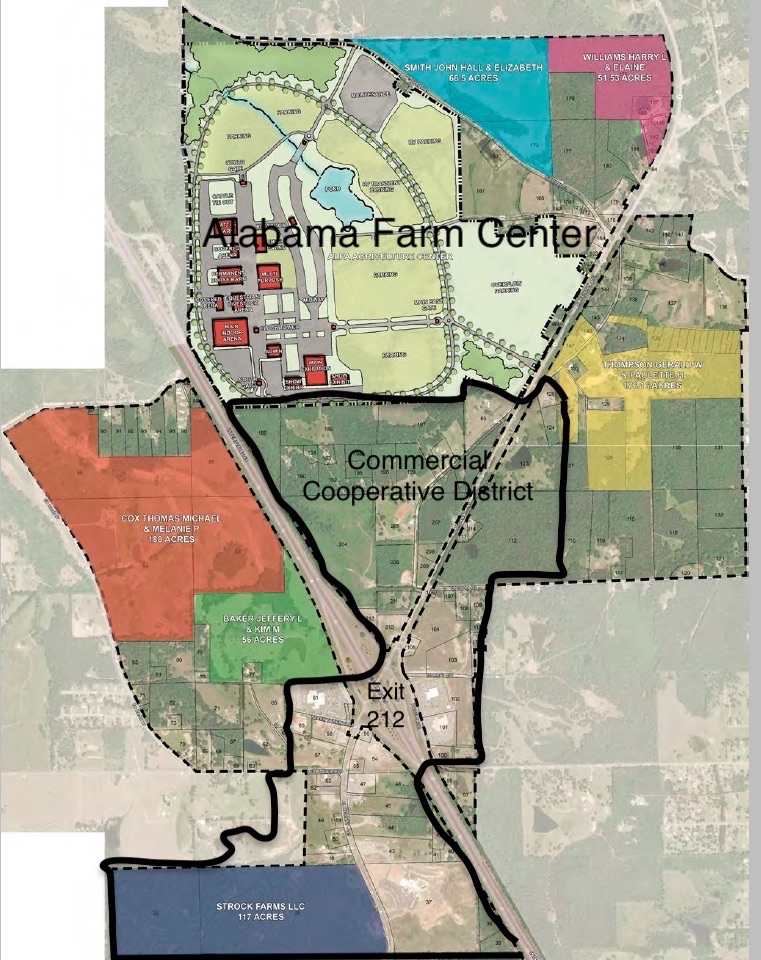 “CICDs can lease their projects to private parties and act as a ‘conduit’ during the development process,” Barlow said. “A CICD can issue bonds, loan the proceeds to a developer and have the developer pay the bondholders back out of project revenues, so the CICD is not responsible for the debt.”

Each of the three members on the board will serve a four-year term. The three members were initially selected in February, but actual establishment of the district was delayed.

In February, the city did not yet have an option to purchase property, which usually happens before such a district is formed, Barlow said. COVID-19 restrictions also slowed progress.

Having a cooperative district also helps communities recruit businesses to locate within that geographical boundary, Barlow said. The City of Clanton has already contracted with NextSite to do this for the areas outlined in the Master Plan for the Exit 212 corridor.

The Clanton City Council approved a 30-day option on two pieces of property on Highway 145 the day before the formation of the district.  Both properties had been discussed with the formation of the Master Plan, which included a number of public input meetings, as properties that would be good for the city to own as a part of development.

To attract businesses or promote renovation “there has to be a way to give the incentives … and a way to assist that is a legal way to assist,” Barlow said.

“The City must look ahead and continue to lay the financial groundwork to maintain the quality services that our citizens expect,” Barlow said. “We basically have three options, which are: raise taxes, cut services or grow revenues. This plan grows our revenue stream.”

Sometimes this area is a downtown district. Cullman has one of these. Many times, the district’s geographical boundary is tied to a specific project. Prattville established a cooperative district to provide incentives and assess a specific fee to get Bass Pro Shops to locate there.

“When you go down there, you pay an extra penny because that is its own cooperative district,” Barlow said. “That district was created to assist in getting Bass Pro Shops what they needed to build in Prattville.”

Barlow said there are also other ways a fee may be assessed in a cooperative district.

The fee will usually go to the developer for a set number of years before it goes to the local government.

“It can be a way to offset the cost to the developer … and incentivizes them a little bit,” Barlow said.

Other incentives can include building or renovating a building for a company.

These incentives help communities be competitive as companies look at multiple sites. Because of this competition, cooperative district board members have to follow nondisclosure agreements during the negotiation phase. This also keeps companies from telling other counties what is being offered to them.

The community benefits by the increased revenue in sales tax generated by having an additional business in town, while in turn having more opportunities to do things within the county.