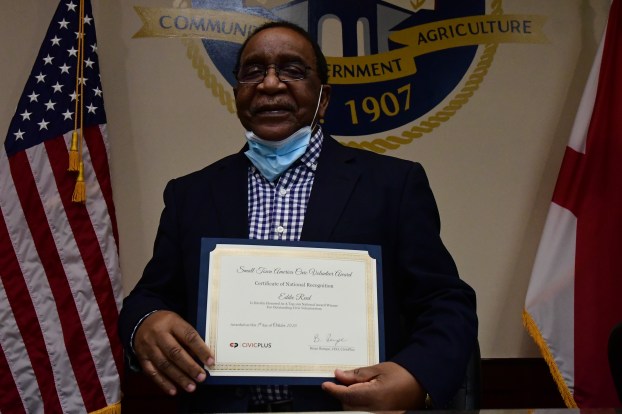 Jemison Mayor Eddie Reed has been recognized as a top 100 National Award Winner for Outstanding Civic Volunteerism by Civic Plus.

“I am a behind the scenes type person,” Reed said. “What I do is a calling from God, and I just thank God for the time that I have served.”

He described the job as “not easy, but good.”

Reed thanked those who had nominated him.

Civic Plus received nominations from across the country for its Small Town America Civic Volunteer Awards and evaluated them based on service to the community. From those nominations, the company chose its top 11 national winners. Civic Plus provides a number of services to help municipal governments.

“Mayor Reed, a lot of people don’t know, in his first term as mayor wanted more monies for our police department,” Welch said. “After going back and forth with the Council, the Council was only willing to give so much money for raises for our police department salaries. This was from 2004-2008, and because he didn’t get what he felt like was good enough … he donated 100% of his salary back to the city for the department to get the raises.”

Reed ran unopposed in this past election and will serve another four-year term.

By Elisabeth Altamirano-Smith/ Freelance Writer Christmas is the season of giving and blessing others. It’s unique sentiment of love and... read more