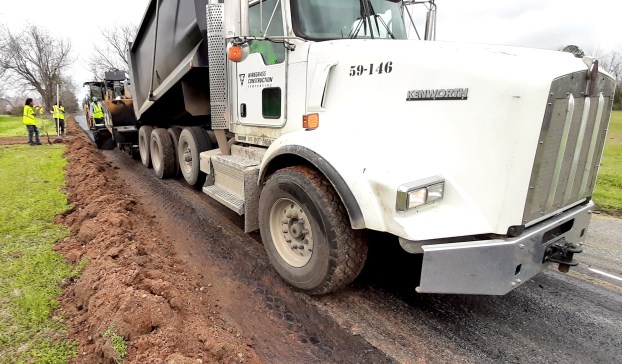 Road projects are often bid out by governments to companies that complete the work. (Courtesy of the Chilton County Road Department)

By Joyanna Love/ The Clanton Advertiser

Much-needed repaving and road improvement projects have increased throughout the state in the past year using funding created by the Rebuild Alabama Act.

The act raised the state gas tax and the funds available for projects at the state and local levels.

The Alabama Department of Transportation is responsible for resurfacing state and U.S. highways, no matter which town, city or county a road is located in. These projects are completely paid for with state revenue and funding received from the federal government. Local governments are responsible for city streets and county roads.

Kemp said the West Central region, which includes 13 counties with multiple district offices and a regional office in Tuscaloosa, receives “about $43 million a year for routine maintenance resurfacing” of state and U.S. roads.

“Because the road is such a high priority, that is where they evaluate the interstates,” Kemp said.

Gov. Kay Ivey proposed the Rebuild Alabama Act, which was later approved by the state Legislature, during a press conference in Maplesville, Chilton County, where a road that had been patched multiple times and an old bridge illustrated the need to improve roads and infrastructure. The act increased fuel taxes by 6 cents per gallon in 2019, 2 cents in 2020 and 2 cents in 2021. After 2023, increases will be determined every other year based on how much the cost of construction changes.

Cities and counties receive a portion of these increases.

Repaving roads is a major part of the Chilton County Road Department budget each year, with the amount of traffic typically on a road determining its priority.

“We have 44 major collectors in the county, and those will handle the vast majority of the traffic on a daily basis,” said Tony Wearren, county engineer for Chilton County. “So we are looking to get those in the best possible shape, then look at the minor collectors, then come on down to the unclassified rural roads.”

This means money is typically spent where it will impact the most people. However, the length of time since a road has been repaved and the overall condition are also factors.

“The county just went through a $5 million resurfacing program that did 34 miles of roads,” Wearren said. “It works out to be $150,000 a mile to resurface a road.”

Paving is expensive because asphalt, which is petroleum-based, is expensive, and the projects require large crews. Roads that require more leveling cost even more.

Potholes are often patched until there is enough funding to repave the road.

“Our job is to keep the road safe, and while patching is making the road sometimes bumpy, that is still better than hitting a pothole,” Wearren said.

ATRIP-II funds are only for improvements for the intersections of state and local roads. Many of the projects funded for 2020 dealt with adding turn lanes.

The competitive Rebuild Alabama grant program created an opportunity for counties to be awarded $250,000 per grant.

Sumter County received one of these grants this year for a bridge project.

Anthony Crear, Sumter County engineer, said replacing the bridge is important because without it, residents would have to take a detour through Mississippi.

The county already had a set of plans that could be adjusted. Crear said that this and the fact that the project could be completed within the one-year limit helped the county secure the grant.

The grant terms are specific. Wearren said the grants will not fund paving a dirt road.

In determining where a project is needed on an interstate, ALDOT looks at the “traffic volume, accident history, complaints,” Kemp said.

In Chilton County, one project will raise three bridges that go over Interstate 65 as it runs through Clanton.

The project will increase the minimum vertical clearance and allow more oversized loads to stay on Interstate 65 rather than having to take an alternate route.

“That is extremely important because of the freight network that goes up and down the interstate,” Kemp said.

One solution to improve traffic flow at intersections is putting in a roundabout.

“Those are set up usually with yield signs, and everybody goes to the right and goes around the circle until you get ready to get out,” Kemp said.

He said a roundabout “is a lot more efficient than a traffic signal.”

Traffic models are used in the study phase to ensure a roundabout could handle the traffic volume at the particular intersection, Kemp said.

In the ALDOT West Central Region, a roundabout has been put in on state Route 5 in Brent in Bibb County.

“It is working very well,” Kemp said. “It was a four-way stop, but the roundabout functions well.”

The roundabouts are made large enough that tractor-trailers can go through.

A roundabout is also planned for Interstate 65’s Exit 208 in Clanton where the on and off ramps intersect with a local road.

Recent Interstate 65 projects south of Birmingham have included adding a third lane in each direction.

How long it takes to complete a road project once it begins is impacted by weather (rain or cold) and the time required to get materials.

“We just ask for patience, and pay attention when you are in a work zone,” Kemp said about drivers.

To create additional funding for local road projects, many counties have designated a portion of sales tax specifically for roads. Sales tax has created an additional $1 million for Chilton County’s 600 miles of roads.

By JOYANNA LOVE/ Managing Editor The Chilton County Board of Education has approved sending a plan to the state to... read more