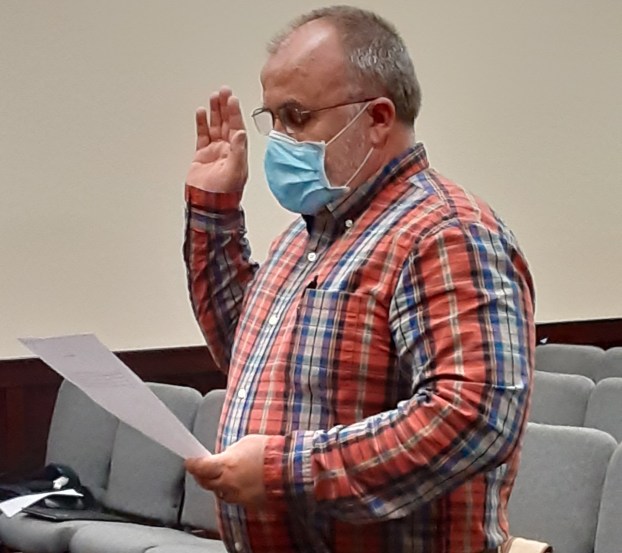 Allen Wilson has been appointed to the Jemison City Council for District 3 to fill the unexpired term of Robert Morris.

Wilson took his oath of office during the Jemison City Council meeting on Oct 19.

Wilson will also be serving the four-year term that Morris had been set to serve as the only qualifying candidate for District 3 in the recent municipal election. The new council will be sworn in on Nov. 2 at 6 p.m.

Mayor Eddie Reed and the City Council selected Wilson after interviews were conducted with those in District 3 that had expressed interest.

Reed let Wilson know there will be trainings provided to help him get acclimated to the role.

“We appreciate you taking the time out to do this,” Reed said.

Wilson said it was a “privilege to be here.”

Later in the meeting, Reed recognized outgoing Councilman George Brasher for his work. Donna Manasco has been elected to serve as the new representative for District 1. Reed asked Brasher to consider continuing to manage Pine Hill Cemetery on a volunteer basis because of his vast knowledge of the layout. Brasher said he would continue to serve on the committee.

Councilman Rex Bittle said he appreciated Brasher for talking through city issues with him, especially when he was new on the Council.

“On behalf of the Jemison City staff, thank you for being as supportive as you have been,” City Administrator Shannon Welch said.

The Jemison City Council tabled a decision on whether to donate to a playground project for Higgins Ferry Park. Kathy Giles and another member of the committee raising money for replacement and upgrades to the playground presented information to the City Council on the potential to benefit the entire county. The proposal is estimated to cost $70,000. The committee has already received $35,000 from the Chilton County Commission, $5,00 from private donors and $10,000 from the Lake Mitchell Home Owners and Boat Owners Association.

If the committee can raise the needed funds by the end of October, it will receive a significant discount from the playground company.

Josh Gilliland crossed the goal line for a successful two-point conversion and the Jemison Panthers won 14-13 in a crucial... read more