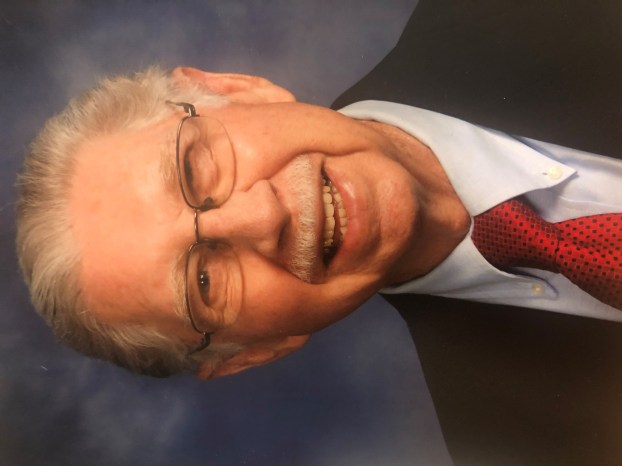 Max Franklin Scott, 86, of Clanton passed from this world on Oct. 16, 2020 to join loved ones in Heaven. He was born June 29, 1934 in Clanton, the second child of Arthur Rostron and Simmie Headley Scott. Max grew up in Clanton and graduated from Isabella High School in 1954.
Max was an avid Auburn fan, from the time he and his brother went on a school trip to Auburn for a feeder pig sale, where he won seed money to start college. He always valued and prioritized education for himself and his family, no matter the delays nor setbacks. Upon starting at Auburn, he was relying on money earned from a peach orchard he and his brother ran, until a freeze killed the crop making it necessary for him to return home until he could earn enough for tuition again. Before completing his undergraduate degree, he served in the Army at Darmstadt, Germany, leaving home three months after the birth of his first child and staying overseas for a little over a year. His masters degree came years later after the birth of his third child, but he remained committed to education, as he commuted while holding down a full-time job to support growing family.
Max married the love of his life, Helen Wyatt Scott, in 1956. She shared his commitment to Christian faith, family, and education (earning her undergraduate degree in nursing from U.A.B., with a new baby and a husband overseas). They raised 4 children in a joyful, loving, caring and sharing home.
Max had a long career employed by Auburn University as an Agricultural Extension Agent, working in Geneva, Autauga, and Monroe Counties before retiring back home to Clanton at 55 years of age. He and Helen enjoyed many years of involvement in the Clanton First United Methodist Church, living out their faith by serving and caring for others in their home community. They also enjoyed camping and tailgating at Auburn football games, as season ticket holders most of their married lives.
Max loved gardening and planting fruit trees. He would “put in a crop” of peas, beans, tomatoes, corn, okra, squash, and peppers on every parcel of land he could access, offering produce to whomever wanted to come pick it. Fruit trees were prolific in his care. He experimented with unique methods of deterring wildlife from eating their share (like hanging out dirty diapers, which kept the deer away!)
Max was involved in two camping clubs, the Kiwanis Club, the Chilton County Auburn Club, United Methodist Men, and served as a committed poll worker, continually emphasizing the importance of voting. With the onset of Parkinson’s Disease, his ability to contribute actively was lessened. However, nothing could put a damper on his great attitude and will to live a full and healthy life. He loved family and his grandchildren, and he often expressed how proud he was of all of them.
Max is preceded in death by his wife of 55 years, Helen Wyatt Scott, his sisters and brothers- and sisters in-law: Dean Hosey (James), Shirley Coggins (Leonard), Mary Frank Scott, Kenneth Smith, as well as his parents.
He is survived by his children, Jimmy Scott (Brenda), Nita Stillwell (Jim), Suzanne Scott-Trammell (Pat), and Russell Scott as well as beloved siblings, A.C. Scott (Christine) and Faye Smith. He also leaves behind nine grandchildren and seven great-grandchildren, whom he loved immensely.
Max’s strong legacy continues in those his life touched, who carry on his strength of character, with a commitment to education, faith, service, and justice. We are thankful to be so rich in blessings.
In lieu of flowers, the family requests memorial gifts to Clanton First United Methodist Church, 207 8th Street North, Clanton, AL 35045. Funeral arrangements will be on Tuesday, Oct. 20 with a 10:30 a.m. visitation at Martin Funeral Home; 2 p.m. service at Clanton First United Methodist Church. The family respectfully requests that all attendees please wear a mask and maintain a distance of 6 feet. We can touch our hearts or blow a kiss instead of hugging. We love you all and want everyone to stay safe.
Martin Funeral Home directing.
You may leave online condolences for the family on the guest registry at www.martinfuneralhomeinc.com.

With heavy hearts, we announce the death of Morris “Butch” Eldred Horton, Jr. of Alabaster, Alabama, who passed away on... read more