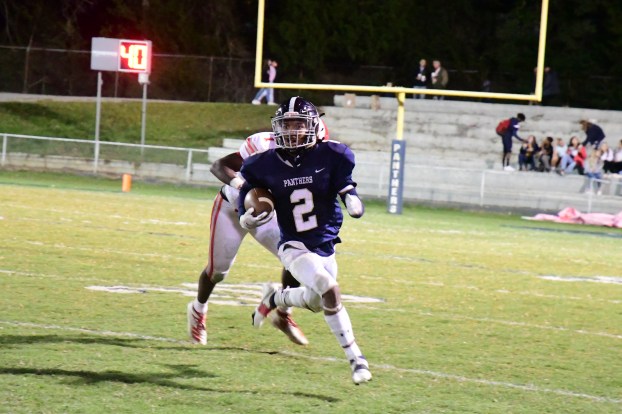 Jemison’s Josh Gilliland runs away from a Central-Tuscaloosa defender on Oct. 16. (Photo by Anthony Richards)

Josh Gilliland crossed the goal line for a successful two-point conversion and the Jemison Panthers won 14-13 in a crucial area contest against the Central-Tuscaloosa Falcons on Oct. 16.

“This is a shot in the arm for us as a program,” Jemison head coach Blake Bradley said.

Bradley made the call to go for two shortly after Gilliland busted through the line of scrimmage and sprinted up the gut and into the end zone to cut the Panther deficit to one with 2:26 to play.

“It took me a minute to process what was going on and all week we had been shaky on field goals and PATs,” Bradley said. “I knew we had enough time on the clock that if we didn’t convert it, we could kick an onside kick and had two timeouts. It was probably a little bit of a crazy call, but one that I think was the right call.”

The push from the offensive line and the success Gilliland was having running behind them also helped sway him toward the decision he made. 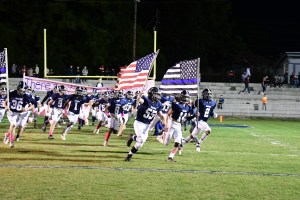 The Panthers enter onto the field in a patriotic way. (Photo by Anthony Richards)

“We challenged them hard all week, because I knew this was like a playoff game for us to keep our postseason hopes alive,” Bradley said.

Gilliland embraced a heavy dose of carries with Hunter Baker sidelined with an injury.

However, the senior stepped up with a memorable performance while continuing to play both sides of the ball and his usual full-time role at safety on defense.

“I love my team and we knew we needed this win to move forward,” Gilliland said. “This was our last homecoming, and we have a chance to make the playoffs too. This one really meant a lot.”

Jemison had lost a couple of games this season to Maplesville and Marbury in heartbreaking fashion, so Bradley liked that they got to experience the other side of those outcomes for once.

“We definitely learned from those games, and that the end of the day they didn’t give up and they believed they could win the game,” Bradley said. 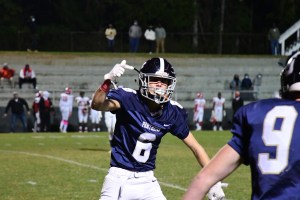 JHS remained in playoff contention with the win over Central-Tuscaloosa. (Photo by Anthony Richards)

The Panthers defense was stingy all night and continually swarmed to the ball en route to shutting out Central-Tuscaloosa in the first half as Jemison led 6-0 at halftime.

It was only fitting that it was the defense that put the stamp on the victory by forcing a turnover on downs.

Brent Averette came up with a big-time sack as he grabbed the opposing quarterback with his big paw and dragged him to the ground to force a third and 25.

Two plays later, the Panther secondary gave the ball back to the offense after a pair of incompletions.

Fernando Prado had an interception in the game for Jemison.

Tigers lose close one on homecoming