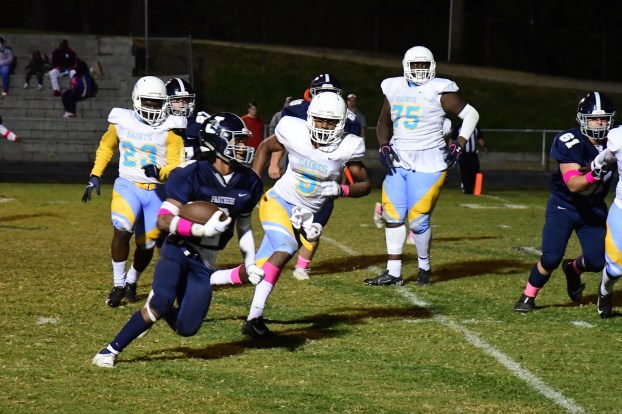 Josh Gilliland turns the corner against Selma on Oct. 2. (Photo by Anthony Richards)

The Jemison Panthers lost 46-19 at home to Selma in a region contest on Oct. 2.

However, despite the loss, the Panthers continued to fight until the very end including a touchdown pass from James Wright to Hayden Robinson with just over a minute remaining in the game.

Wright threw three touchdown passes on the night, the first of which was completed to Luke Mitchell for Jemison’s first points of the night to cap their third offensive possession of the game.

Selma’s first two offensive plays resulted in long touchdown runs, and they led 12-6 following the hookup from Wright to Mitchell. 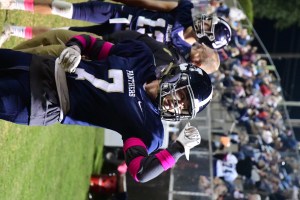 Although Jemison’s defense stood tall at various times throughout the contest, it was a constant battle for them to contain the speed that Selma presented.

Selma hit a 30-yard touchdown pass with 1.5 seconds left in the second quarter and took a 32-6 lead into the halftime break.

The Panthers had a couple of methodical productive drives that looked very promising, but they were unable to capitalize with points on the scoreboard as often as they would have liked.

Jemison’s offense hit its stride during a drive in the fourth quarter that started with Tyriq Archie hauling in a pass from Wright along the right sideline to move the ball past midfield.

Senior Josh Gilliland followed it up with a nice run down inside the Selma 20-yard line.

The drive ended with Wright rolling to his left and finding a wide-open Ryan Harris, who turned up field and carried a defender into the end zone for the Panthers second touchdown on the night.

By BRANDON SUMRALL Special to the Advertiser   A week’s worth of homecoming festivities came to a close on Friday... read more