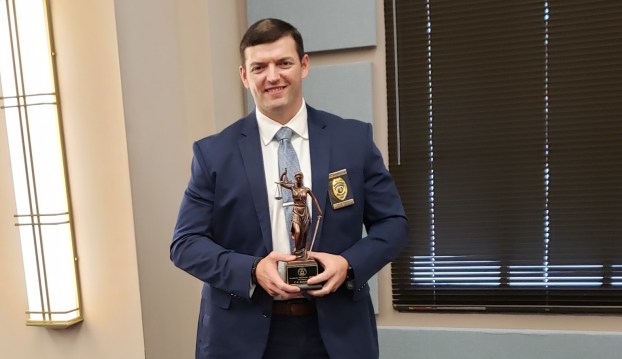 The Victims of Crime and Leniency organization presented C.J. Robinson with the Miriam Shehane Award. (CONTRIBUTED)

C.J. Robinson, chief deputy district attorney for the 19th Judicial Circuit, has received the Miriam Shehane Award from the Victims of Crime and Leniency organization.

“It was an unexpected thing, and it is also extremely humbling,” Robinson said.

While VOCAL does have an annual awards presentation, this particular award is given out less frequently.

Robinson is on the board for VOCAL, but he said everyone kept the secret well because he participated in board meetings and still had no idea he was receiving it.

The award is named for the organization’s founder who advocated for victims to be allowed at all court proceedings in Alabama.

“Back then, victims could be excluded from proceedings,” Robinson said. “They didn’t have a right to be in the courtroom.”

Today, after the passage of the Victim’s Bill of Rights, victims cannot be prohibited from attending any hearing.

“I have been blessed to have the opportunity to be the voice for people who can’t talk for themselves, speak for families,” Robinson said. “I have learned something from every single family that I have worked with for 13 years.”

He said each of these families “have helped me become the prosecutor that I am.”

The organization highlighted Robinson’s work on three main cases when presenting the award. One kept a perpetrator from being deported before he could stand trial.

“It was the Hispanic male who drove drunk and killed a nurse in north Chilton,” Robinson said. “… Essentially, if he would have gotten deported they would have taken him to the border of Mexico dropped him off and said, ‘you can’t come into the United States.’ To which he could have obtained a fake social security card and entered illegally and lived a full life in Arizona and never have answered for the murder.”

Robinson also filed objections to widespread release of inmates not initially scheduled for release during the COVID-19 pandemic.

“There were murders, rapists and child molesters — a long list of people who were not good people who were about to walk out of the jail,” Robinson said. “… I sprang into action to try and give some people some intel.”

A third case VOCAL cited as a reason for Robinson being considered stemmed from his work to prevent two victims under the age of 10 in sexual abuse cases from having to go through “one of the most intrusive things I have ever seen” at the request of the defense.

Robinson’s work on drafting legislation requiring notification if someone absconds from a halfway house was also highlighted.

Robinson has been with the DA’s office for 13 years. While in law school, Robinson knew he wanted to be a prosecutor.

“I don’t feel like I have worked a single day,” Robinson said. “I’m doing what I love.”

He said the VOCAL awards ceremony was a special time of people concerned about the same goal being together.

“There was definitely a bond that you could see was there,” Robinson said.

Two graduates were honored for completion of the His Steps for Women Inc. 12-step addiction recovery program by Probate Judge... read more