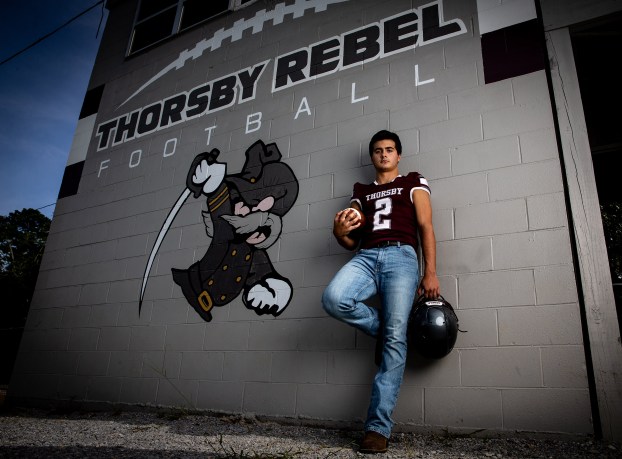 Brody Barnett threw for 253 yards and two touchdowns to lead Thorsby to an overtime win against Prattville Christian Academy on Sept. 25. (Photo by Brandon Sumrall/Special)

The Thorsby Rebels earned a gutty 20-14 overtime victory on the road against Class 3A Prattville Christian Academy on Sept. 25.

Stepping up one classification did not phase the Rebels, who improved to 3-2 on the season thanks to a lot of heart and determination in the winning effort.

Brody Barnett and A.J. Smith were in the groove as a quarterback and receiver combination.

Barnett completed nine of 14 passes for 253 yards and two touchdowns.

All but three of Barnett’s completions were hauled in by Smith who finished with six catches for a whopping 210 yards and one touchdown through the air.

However, Smith’s magical night did not stop there, as he also led the team with 86 rushing yards and a score.

Brody Mims was the other recipient of a Barnett touchdown toss in the game.

Noah Littleton led Thorsby with six tackles and forced a fumble that was recovered by Jamario Montgomery.

The Rebels defense was stifling and forced Prattville Christian into three turnovers in the contest.

Remington Taylor and Mims each picked off a pass to accompany Montgomery’s fumble recovery on the score sheet.

Taylor’s interception was his second of the 2020 season.

Thorsby will have a subsequent bye week due to Francis Marion, who was on the schedule, having cancelled their season stating pandemic concerns.

The forfeit gives Thorsby the win and will improve the Rebels to a record of 4-2 overall on the season and 2-1 in region play.

By JOYANNA LOVE/ Managing Editor The Chilton County Board of Education discussed potential ideas to help teachers who have both... read more