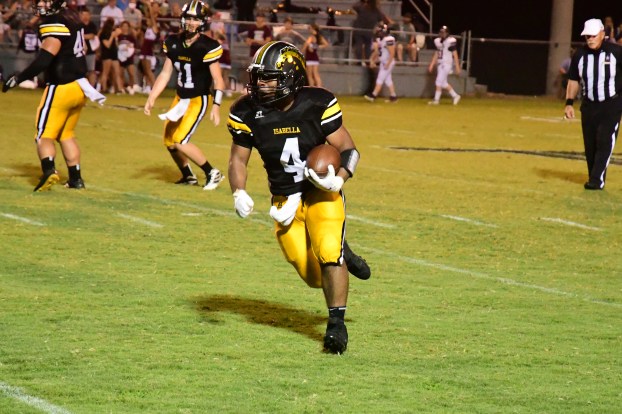 J.J. Wilson has become a real threat out of the backfield for the Isabella offense this season. (Photo by Anthony Richards)

The Isabella Mustangs have shown a knack for winning games, with senior quarterback Jake Logan now having two late game-winners under his belt.

Logan and the Mustangs have shown a maturity in those late-game situations so far this season and do not appear to get tight at all as the clock ticks down in close games.

The ability to win close games is an attribute that should serve the Mustangs well as the playoffs roll around.

The Isabella players and fans are still riding the emotional highs even days after a program-defining victory against Class 5A Greenville last Friday night.

One thing for certain is that Isabella navigated their non-region slate of games as good as they could have hoped, even with a lopsided defeat to defending state champion Fyffe in the opener.

However, the Mustangs must now refocus and get ready to finish the season strong with a string of region games that will define whether they make the postseason and what their seeding will look like if they do.

That stretch begins Oct. 2 at home against Highland Home, which gave Maplesville all it could handle to open the season.

Highland Home has some athletic players and is not afraid to take shots down the field at times.

This is something the Isabella secondary must be ready for and willing to embrace the challenge.

Braxden Giles has the speed to stay stride for stride with any receiver and is coming off a game where he had an interception and two pass breakups.

Look for Isabella to take shots of their own on offense, as they have shown the ability for chunk plays.

J.J. Wilson continues to be a playmaker out of the backfield for the Mustangs and will be someone who could cause problems for Highland Home as a runner and a receiver.

Wilson has been more involved in the receiving game at times and led the team in that department in the previous game.

The various ways he is used by offensive coordinator Jared Day will be something to follow throughout the game and the remainder of the season.

Player of the Week A.J. Smith, Thorsby Hauled in six passes for 210 yards and a touchdown Ran for 86... read more