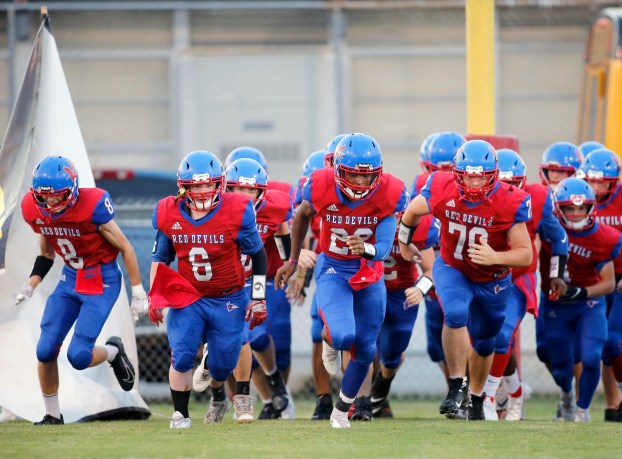 Verbena runs over, around Central Coosa

It has been a while since Verbena football has had a winning week like they did following a huge 34-28 road victory against Central Coosa on Sept. 25.

According to head coach Josh Robinson, the school’s junior varsity and varsity both won in the same week for the first time in years.

The varsity won behind a powerful rushing attack that imposed its will on the Central Coosa defense all night long.

D.J. Jackson ran out of his mind en route to a mega performance that included 278 yards and three touchdowns on the ground.

Zion Smith also had a productive night running the ball with 109 yards and a touchdown of his own.

Starting quarterback Jared Quinn continued to give Verbena a threat of running the ball from that position as well, despite playing through injury.

Robinson credited the offensive line for consistently winning the battles up front and opening up the holes needed for Jackson and Smith to showcase their skills.

“They have a great work ethic,” Robinson said.

Marvin Rico and Corey Edwards are a pair of seniors along the offensive line that have provided leadership to the younger guys.

The ground game was so successful that the Red Devils only threw one pass the entire game.

According to Robinson, running the ball was working so well that they just continued to stick with it until Central Coosa proved they could stop it.

That point never came during the contest.

“We didn’t want to overthink it and end up out-coaching ourselves,” Robinson said.

It was Verbena’s first victory this season that came on the field and not due to forfeit.

“There’s a night and day difference from last year,” Robinson said. “We’re more physical and as a result we’re scoring more points, and we’re in every game.”

Not only does the win improve Verbena’s record to 3-2 on the season, but it also has begun to instill a passion once again for the football program as a whole.

“They understand that this is a huge deal,” Robinson said. “I was getting texts all day Saturday and Sunday. I’ve had two or three students already come up to me today and ask about football next year.”

By JOYANNA LOVE/ Managing Editor The Chilton County Board of Education discussed potential ideas to help teachers who have both... read more