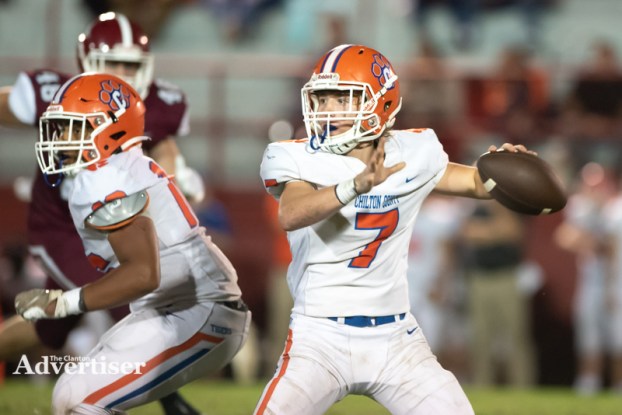 The Shelby County Wildcats held onto a six-point lead to beat the 6A Chilton County Tigers, 27-21, despite a fourth-quarter Tiger rally that nearly turned the tables.

The first quarter was all Shelby County.

Unfortunately, SCHS running back Raheem Montgomery was hurt at the Chilton County 4-yard line and walked off the field. That is when Evan Joiner stepped up, scoring a touchdown for the Wildcats with 5:08 on the clock.

Following the kickoff, Chilton County barely got their hands on the ball when Isaac Montgomery’s pick six and the ensuing PAT doubled the Wildcats lead to 14-0.

A false start was called on Shelby County, but Jordahn Garcia helped recover some yardage and made his way to the Tiger 6-yard line.

Joiner ran it in for another Wildcat touchdown with 1:39 on the clock. The kick was good and Shelby County led 21-0 at the end of the first quarter.

Chilton County made some headway in the second quarter, as Sam Smith completed a pass to Jakeveon Bolding for about 20 yards. But Shelby County’s Goodman had other plans and stopped the Tigers’ momentum with an interception.

The Tigers threatened to score again, but a pass intended for Bolding was incomplete in the end zone.

Shelby County’s Will Price picked up a sack, and the score stood at 21-0 at halftime. 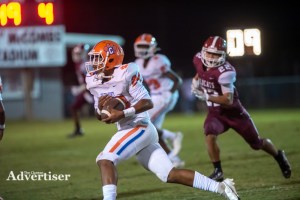 In the third quarter, Chilton County tackled Shelby County’s punter in the backfield to put the Tigers in favorable position. Smith connected with Bolding again for a 13-yard gain, but Shelby County ended up taking over on downs.

Wildcat quarterback Connor Aderholt found Goodman and Isaac Montgomery for 29- and 27-yard gains, respectively, then Joiner rushed for 15 more and capped it with a touchdown run. This time the PAT was blocked, resulting in a 27-0 score with just under 11 minutes left to play.

Then, things got interesting. Following a string of first downs, Chilton County’s Smith connected with Jaberrius Peake for a 19-yard touchdown pass. The kick was good, and it was 27-7.

The Tigers recovered the ball on the ensuing kickoff. Smith completed a pass to Jakobe Worthy for a 42-yard gain, setting up a 7-yard touchdown pass to Bolding with 7:39 left on the clock.

The Wildcats recovered the onside kick attempt but ended up going three-and-out. Then, boom—Smith found Bolding who hauled in an 84-yard touchdown at 5:10 to bring the Tigers within six points of tying the game.

It would be too little too late, though, as Shelby County pushed down the field and the clock kept ticking. Goodman carried the ball all the way to the Chilton County 1-yard line before time ran out.

“Shelby County played a great game,” said Chilton County coach Tal Morrison. “We came out there in the second half and started playing a little bit better ball. We want to keep working on our assignments and keep striving and working each session to try to get a little better.”

Shelby County coach Heath Childers said penalties and some blown opportunities killed some drives in the third quarter, but he commended his players.

“At the end of the day, our guys gutted it out and they found a way to win,” he said. “That’s just a tribute to the players. They really dug in, bowed their neck, pushed through and got the W.”