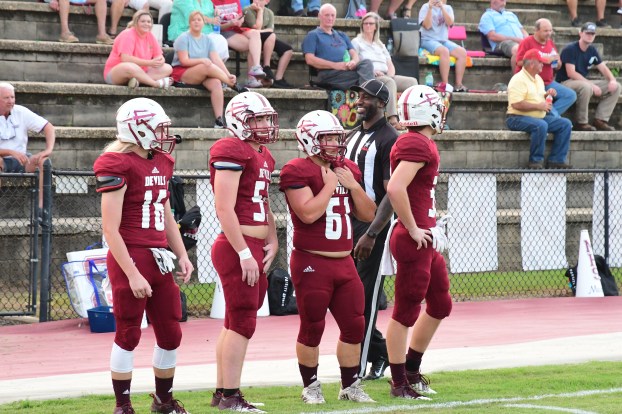 Gale Sayers and Brian Piccolo built a time-tested friendship on the football field, and there are plenty of similar bonds being developed among county teams every Friday night during football season. (Photo by Anthony Richards)

News of football legend Gale Sayers’s death on Sept. 22, prompted me to go home and watch “Brian’s Song,” which was a movie originally created in 1971 and then remade in 2001.

I wound up watching the remake, and it brought tears to my eyes as it has every time I’ve watch it.

I just can’t help it. My eyes begin to water, but that just proves how powerful of a movie it is.

One of the things that makes it so powerful is that it is a true story and one that just eats at the heart strings of any sports fan.

The story of Gale Sayers and Brian Piccolo is one of friendship and brotherhood.

For those who aren’t familiar with the story, Sayers and Piccolo were part of the same backfield for the Chicago Bears for roughly three years before Piccolo was diagnosed with cancer during the 1969 season.

His battle with cancer ended with his death months later at 26 years old.

The two will forever be linked together because of the bond on and off the field.

The strength of that bond was made evident when Sayers received an award for the courageous fight he showed coming back from a devastating injury he suffered.

However, with Piccolo fighting for his life at the time, Sayers chose to accept the honor on his behalf.

That selfless act not only showed who Sayers was as a human being, but the kind of person Piccolo was for such admiration to be drawn.

Not only were they good friends and teammates, but they became so during a time when it was not commonplace for people of different races to have such a close-knit relationship.

People today can learn a lot from Sayers and Piccolo and the way in which they were able to block out the world’s peer pressure and live their own lives as a result.

I have no doubt that they will be able to pick up their friendship right where it left off up in heaven.

I encourage every who reads this to follow it up by watching “Brian’s Song,” either one will do, as a way to honor these great men and show respect to the courage they demonstrated during their time on earth.

The following are photos from action across week two of the high school football season. Share this:TwitterFacebook read more