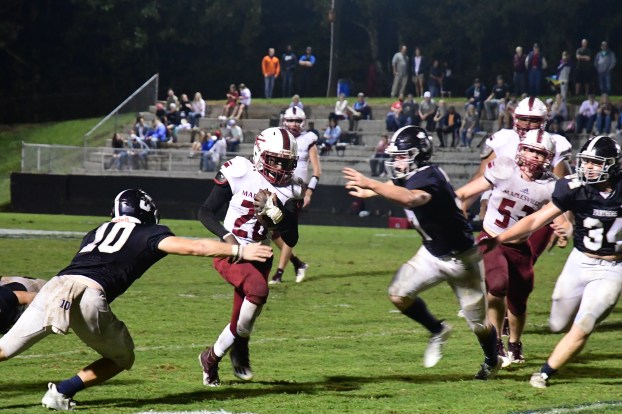 Jakavion Jackson attempts to dart through a pair of Jemison defenders during a game on Sept. 24. (Photo by Anthony Richards)

It had been seven years since Maplesville and Jemison met on the football field and the two teams did not disappoint in their return to playing each other on Sept. 24.

The Red Devils (5-1) outlasted the Panthers (2-3) to win a 24-17 barn burner that saw both teams flying to the ball despite playing on a damp field.

“You’ve got to kind of use your body to catch the ball more,” Maplesville senior Caleb Hobbs said. “There’s certain things you’ve got to do in the wet compared to the dry. It’s a different mindset.”

The Panthers jumped out to the early lead after marching down the field on a methodical drive to open the contest, which took up more than half of the time on the first quarter clock in the process.

Jemison capped the drive with a touchdown pass on fourth down from James Wright to Luke Mitchell.

However, Maplesville responded with a scoring drive of their own on their first offensive possession as Brady Harrison ran for a touchdown and quarterback Jackson Abbott hit a wide-open Latrell Wilson for a successful two-point conversion to go up 8-7 at the end of the first quarter.

The Red Devils increased their lead to 15-7 following a rushing touchdown by Abbott on a quarterback keeper to the right that fooled the JHS defense.

Abbott did a nice job of finding Hobbs in the passing game a couple of times early on in the contest to help move the chains and keep scoring drives alive.

“As long as we can execute with the offensive line blocking and running good routes, I think we’ll just keep improving in the passing game,” Hobbs said.

Jemison was driving late in the second quarter when Wright was sacked by Maplesville, which caused the Panthers to rush the field goal unit onto the field as the waning seconds ticked down, and they had no timeouts left. 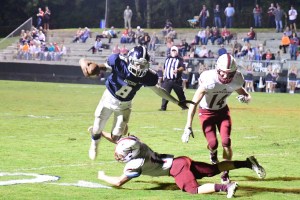 James Wright is upended by a Maplesville defender. (Photo by Anthony Richards)

The clock was eventually stopped with .4 seconds left after Maplesville jumped offsides in all of the frantic situation.

Maplesville jumped offsides one more time on the next attempt to move the ball another five yards closer to the end zone.

Arturo Malpica split the uprights as time expired, and Jemison cut the Maplesville lead 15-10 at halftime.

Both defenses stood their ground in the third quarter with the only points by either team coming from a Maplesville safety that grew their lead to 17-10 heading into the final quarter of play.

The safety was setup after a perfectly placed coffin corner punt by Jacob Johnson forced the Panthers to start the drive at the three-yard line.

Maplesville’s Jakavion Jackson had a pair of determined runs during a drive early in the fourth quarter, the second of which went for a score straight up the gut of the defense to extend the lead to two possessions, 24-10 with 9:54 to play.

Knowing that they were running out of time, Jemison exploded for a two-play scoring drive where Wright connected with Tyriq Archie streaking down the right sideline for a touchdown. 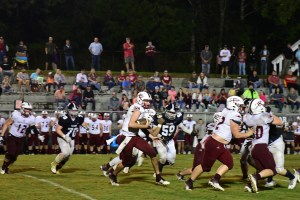 Maplesville’s Jackson Abbott followers his blockers at the line of scrimmage. (Photo by Anthony Richards)

With the contest back to within one possession, 24-17, the Jemison defense stepped up, and Gavin Smitherman pressured Abbott into a strip sack that was caught in midair by Skylar Reeves and appeared to be returned for a touchdown.

The sack and fumble recovery stood, but the touchdown was erased from the scoreboard after the play was brought back following a facemask penalty called against Jemison.

Following the turnover, JHS had one last drive to win the game with 3:40 remaining, but turned the turnover on downs after they were unable to convert a fourth and 22 to keep the drive alive.

According to JHS head coach Blake Bradley, he was prepared to go for the win by going for two points had the Panthers been able to punch it in on the last drive.

Maplesville has a bye next week, while Jemison will face Selma at home in a region contest.

“We’ve got a good rhythm going here in the past couple of weeks, and I think we’re going to do some good things here on the road to state,” Hobbs said. “We’ve got a bye week now, and, hopefully, we’ll come back with even more confidence.”

By Brandon Sumrall/ Special to the Advertiser A varsity volleyball matchup between Jemison and Holtville on Sept. 22 would take... read more