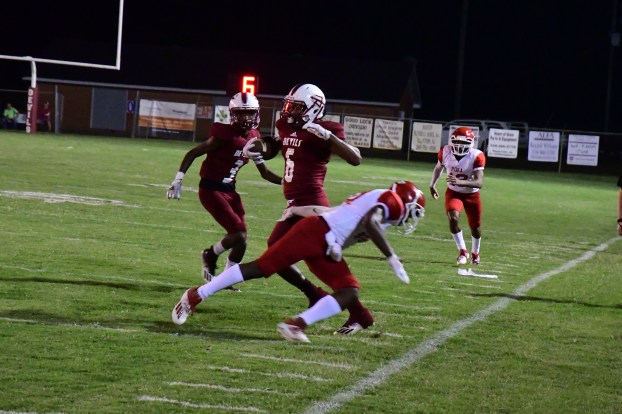 The Maplesville passing attack was hitting on all cylinders for the second straight game following a 35-0 shutout of region foe Loachapoka.

With the win, the Red Devils improved to 3-0 in region play and have won their last two games by an average of 37 points.

“I feel like we’re really starting to come together ever since the Isabella game,” Maplesville senior Latrell Wilson said.

Wilson had a huge night receiving, as he was on the other end for three of fellow senior Jackson Abbott’s four scoring strikes.

The pair connected for touchdowns on Maplesville’s first two offensive possessions of the contest to quickly propel the Red Devils out in front, 14-0.

The first of these touchdowns Abbott hit Wilson down the left sideline, while the second of which he found him streaking down the middle of the field for a well-timed pitch-and-catch.

“Me and Jack have always had a special connection over the years,” Wilson said about the relationship on the field between the two seniors. 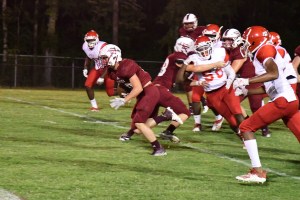 Brady Harrison breaks through the line of scrimmage. (Photo by Anthony Richards)

Wilson was named an honorary captain for the game and took part in the coin toss festivities.

“That was nice of coach (Abbott) to do that for me,” Wilson said.

Wilson’s busy first quarter continued as he helped setup the Red Devils third score of the game after hauling in a pass and made guys miss to convert a fourth and long down inside the 10-yard line.

During the play Wilson looked like a bull fighter, as he gave an ole to a couple of Loachapoka defenders along the sideline.

Brady Harrison cashed in Wilson’s effort with a touchdown run on the very next play to put Maplesville up 21-0 at the end of the first quarter.

“It feels like I can do anything out there when the ball’s in my hands,” Wilson said.

The Maplesville defense was a handful for Loachapoka the entire game and were able to blow up plays with penetration on several occasions.

Some of the consistent harassers included Timber Lenoir and Brandon Pickle. 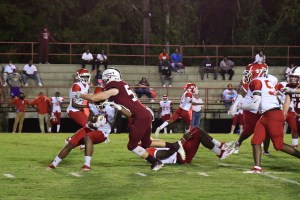 Abbott intercepted a pass at the Red Devils 5-yard line to halt a promising Loachapoka drive.

He ended up capping the drive with a third touchdown pass to Wilson, who once again turned a first down into much more with just a couple of quick moves.

Maplesville led 28-0 at halftime, and Abbott added a fourth touchdown through the air, this time to Caleb Hobbs, who got behind the secondary late in the third quarter as the Red Devils extended the lead to 35-0.

Maplesville piles up points against Bears