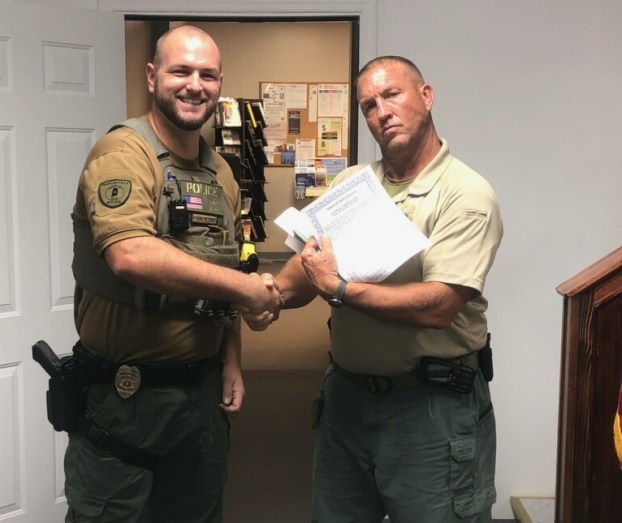 Maplesville Police Officer Chris Jones received a commendation for lifesaving actions from the Maplesville Town Council during a meeting on Sept. 14.

Maplesville Police Officer Chris Jones received a commendation for lifesaving actions from the Maplesville Town Council during a meeting on Sept. 14.

Jones had responded to an accident in July and was part of providing lifesaving field trauma care to a child that had a head injury. Detective Josh Hubbard and Officer Jason Reeves who were also a part of providing the aid were recognized during a meeting in July. Jones had been unable to attend that meeting, and the council had canceled some meetings since then.

The Council also approved Jones for his three-month raise of 25 cents.

A three-month raise was also approved for Officer Edwin Freeman.

Updates on road projects were given.

Myles Mayberry with Alabama State University updated the Council that the school can do the necessary work to update the Revenue Commissioner’s office of all property located inside the town limits, as opposed to the entire zip code area, for property tax purposes.  A contract with expenses up to $5,000 will presented at a later date.