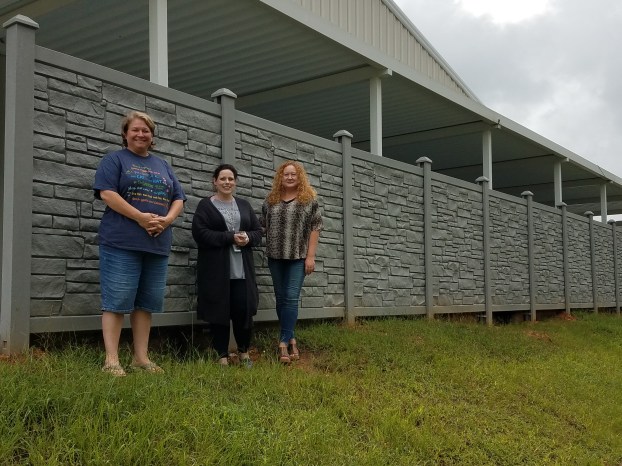 Dana Price (left to right), Christa Garner and Rachel Mims stand in front of a wall that become a mural as part of a student project this school year. (Photo by Anthony Richards)

Now that school is back in session, one of the projects that Jemison Intermediate School will be working on is a mural designed to bring together the school and the community.

“We came together and talked about what kids need to succeed,” fourth grade teacher Christa Garner said. “We came to the conclusion that it is multi-level.”

According to Garner, the theme for the mural is to have three trees representing education, beliefs and the community.

“We thought about the growth of a tree and for a tree to grow strong it has to have deep roots,” Garner said. “That’s what we are, and it’s not just the offshoots of teachers, but the community and how important that is.”

Often times, educators are directly related to a student’s success in the classroom, which is then often linked to a rewarding life in the future after school.

“We need the family and the whole community to truly create successful children,” Garner said. “We want children to know that we are behind them, and we are the roots holding you up and giving you everything you need to be truly successful.”

Fifth grade teacher Dana Price hopes the mural will be a physical reminder to all those that view it that a successful community in the future starts with the teachings shared with students at an early age.

“We don’t know how it’s going to look, but we’ve got a direction,” Price said.

Students could play a role in helping decide which direction the mural takes. The initial idea is to have poems from students included as part of the mural.

“The kids will definitely be involved in it,” Price said. “We’re excited.”

The process of getting the word out about the mural and getting students involved is scheduled to take place in the coming months with an artist rendering of the mural expected sometime in December.

“We want people to go by (the mural) and know what it means and what it stands for,” Garner said. “That takes all of us.”

JHS unable to finish off win against Marbury

The Jemison Panthers lost 18-13 in a heartbreaker on the road to the Marbury Bulldogs on Sept. 11. It is... read more