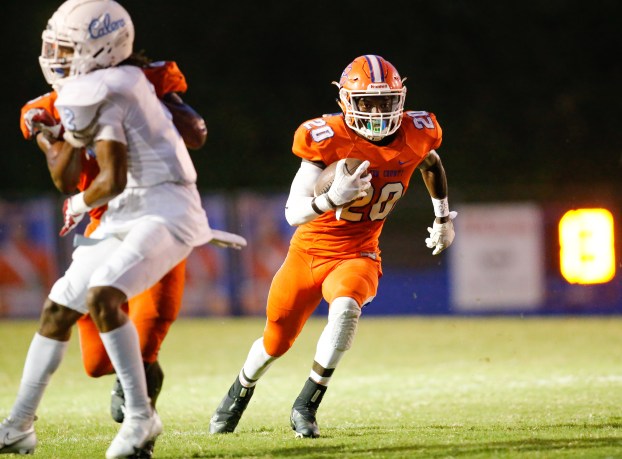 Jaberrius Peake of CCHS looks for running room against Calera on Sept. 11. (Photo by Brandon Sumrall/Special)

The Chilton County Tigers entered regional competition on Friday night in a class 6A, Region 3 matchup with the visiting Calera Eagles.

The home standing Tigers would take possession to start the night’s contest at their own 32-yard line and thanks to a pair of big runs by Kevin Staffney and Jakobe Worthy, the Tigers would march down inside the Calera red zone.

With a first and goal from the Eagle 3-yard line, Worthy would find pay dirt to put the Tigers on the board early 7-0.

The Chilton County defense came prepared to play as well and would allow not a single Calera first down on the Eagles opening drive as a fourth and 10 punt from their own 44 would turn the ball over to the Tigers at their own 42.

Facing a quick three and out, a third and 10 pass interference call would move Chilton County out near midfield where two plays later, a 42-yard connection between quarterback Sam Smith and Jakeveon Bolding would make it a 14-0 Tiger lead late in the first quarter.

The contest would turn the way of the defenses through the remainder of the first period and well into the second, when the Eagles would put their first points of the night on the board thanks to a 1-yard touchdown by Tyler Nelson. With the PAT no good, the Eagles would go to the half trailing 14-6.

The halftime break would do little to cool the Eagle offense, as just three plays into the third quarter Nelson would break loose from the Eagle 42-yard line only to be dragged down at the Tigers 2-yard line.

Two plays later, Nelson would connect with Noah Williams for a 2-yard touchdown reception. With 9:59 remaining in the third, Chilton County led 14-12.

The Eagles looked poised to take the lead with 3:53 remaining in the third, but a Chilton County defensive stand at their own 1-yard line would turn the ball over to the Tigers.

A quick three and out appeared to be destined for the Tiger offense when on a third and eight at their own 3-yard line, Kevin Staffney would bounce off the right side and go 95 yards down to the Calera 3-yard line. 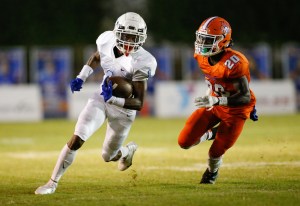 CCHS and Calera played a close contest until the very end. (Photo by Brandon Sumrall/Special)

One play later, Worthy would make it a 21-12 Chilton County lead.

The Tigers lead would be short lived however, as Art Amos would receive the ensuing kickoff at his own 14 and return it all the way down to the Chilton County 7-yard line.

Two plays later, Nelson would find the end zone to make it a 21-19 Tigers lead at the end of the third quarter.

A quick three and out by the Tigers would hand over possession to the Eagles with 10:44 remaining where Nelson and company would go to work at the Chilton County 44.

A pair of big runs by Kobe Prentice and Noah Williams would move the Eagles down inside the Tiger red zone.

The Chilton County defense would stand tall and would force the Eagles in to a forth and six at the 6, where a 23-yard Calera field goal attempt in the driving rain would sail through the uprights to give the Eagles a 22-21 lead with 7:56 to play.

With heavy rains and lightning setting in on Tiger Stadium, the teams would be sent to the locker room with 3:37 remaining and the Eagles holding a one-point lead.

With play resuming after the weather delay, a Chilton County defensive stand would hand the ball over to the Tigers at their own 2-yard line.

However, on second and 11 quarterback Sam Smith would be brought down in the end zone for a safety that would bring the game to its final score of 24-21.

It has been all Isabella in the first half. The Mustangs led 7-0 at the end of the first quarter... read more