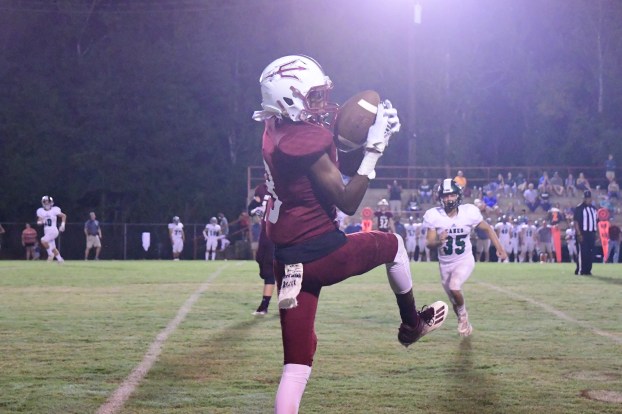 Johnathon Wilson hauls in a reception in an exhibition against Flomaton on Sept. 4. (Photo by Anthony Richards)

The Maplesville Red Devils faced a tough test defensively against the power running game of Flomaton during a 27-7 loss in an exhibition matchup on Sept. 4.

Despite the outcome, Maplesville improved to 2-1 on the season because the game was scheduled following a forfeit by Barbour County.

It was a game on contrasting styles offensively, as Flomaton primarily pounded the rock while the Red Devils took to the air much more often in pursuit of a balanced attack.

According to Maplesville head coach Brad Abbott, there is a lot that Maplesville can take away from the game, and he is glad he scheduled it because it was much better than a week off would have been.

“There’s more good that came out of this than bad,” Abbott said. “This was a good practice game and some good competition for us.” 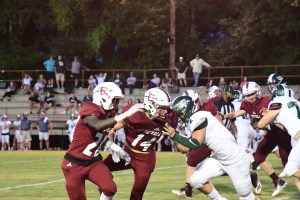 Maplesville’s Timber Lenoir (No. 14) and Jakavion Jackson (No. 20) fight through blocks in pursuit of the ball carrier. (Photo by Anthony Richards)

One of the benefits was the ability for the defense to face a physical team that wants to impose their will along the line of scrimmage.

Maplesville has now squared off against such opponents in each of the last two weeks, and Abbott believes that will prove to make a difference later in the season.

“One of problems last year was slowing teams down like that,” Abbott said. “Our defense has shown that they are a lot better this year than they were last year, which is good now that we are fixing to get into our region schedule.”

One of the bright spots in the game for Maplesville was the play of Brady Harrison, who broke free on several runs and emerged as a reliable option for the Red Devils in the backfield.

“Both our running backs (Latrell Wilson and Jakavion Jackson) were banged up from last week and neither of them ran the ball,” Abbott said.

Although Harrison had received carries in recent games, his increased work load allowed him to showcase excellent skill running between the tackles.

“I thought our offensive line blocked as good as they have all year against a very big front,” Abbott said.

Freshman Johnathon Wilson also made some nice catches and presented Jackson Abbott and the MHS aerial attack with another weapon.

Maplesville trailed 14-0 at halftime but continued to fight and put offensive drives together.

The Red Devils eventually capped one of those drives with a touchdown run from Harrison with 6:51 remaining in the fourth quarter.

“The state championship was not going to be won tonight, but if we take advantage of the situation we have against this team it can help you get there,” Abbott said. “It is a stepping stone.”