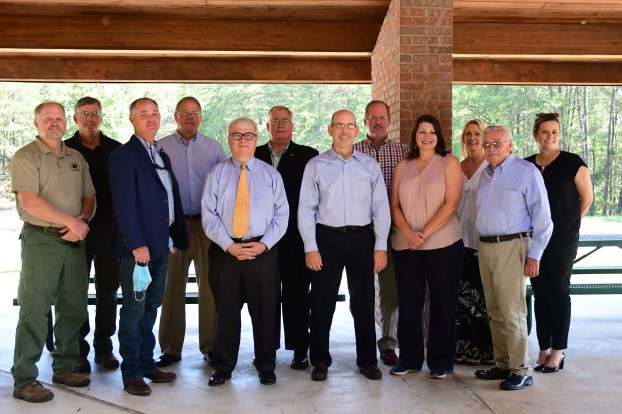 Cawaco Resource Conservation & Development and grant recipients gathered to celebrate $41,000 worth of Chilton County projects in the past year.

Drayton Cosby with Cawaco asked each grant recipient to present some information about the project that the grant funded.

“We are really excited about some of these projects,” Cosby said.

The City of Clanton ($5,000) and the Industrial Development Authority ($15,000) each received funds related to developing the Master Plan for the area near Exit 212 on Interstate 65.

Whitney Barlow of the IDA said the City of Clanton, IDA and the Chilton County Commission wanted to have a plan for development that would include retail opportunities near the Alabama Farm Center at Alfa Centennial Park “to really capitalize on the sales tax revenue that was going to be coming in from nearly one million people” visiting the site.

Chambliss King, an economist from Washington DC and land planners were all a part of developing the plan, which included visits to similar Farm Center projects in Georgia and Nebraska.

Being able to walk to other things to do from the Alabama Farm Center was a focus. The long-term plan also includes ideas for the best land uses along Highway 145, including residential and recreational areas.

“If you’re like me, you will open it up and think, ‘This is too good to be true. This can’t happen.’ The thing that makes me feel good about it is two different economists have said, ‘This will work,’” Chilton County Chair Joseph Parnell said. “That encourages me that we are not just chasing a field of dreams.”

He said the plan includes things in both the near and far future.

Barlow said the plan has been presented multiple times and is available on the IDA website.

The Chilton County Commission secured a grant with help from Barlow for $10,000 to be combined with other grants and funding to put a storm shelter in the New Convert community.

Parnell and Barlow said residents of New Convert had repeatedly asked for a storm shelter in their area.

Bids specs are being modified to hopefully prevent some of the moisture and paint issues that have happened with existing storm shelters.

“For the seven years that I have been on the Commission, they have approached the Commission quarterly as a group and asked us to please remember them when funding would become available to build a storm shelter,” Parnell said. “Their primary motive was they have a lot of older people in their community … A lot of people in that community live in house trailers, and we all know how dangerous that is (in a storm).”

Jack Williams of Alabama Public Television explained how its grant for $7,600 had been used to promote tradesman careers.

Williams said the emphasis for every high school student to attend college has “created shortages of craftsman (and tradesman) in our communities.”

“We were granted this grant to work with workforce development in making students that maybe don’t have a real interest in going to college or want a good paying career to let them know that craftsmen are in high demand, and they make excellent money,” Williams said.

This included multimedia presentations and posters in the schools.

He said many who choose to complete a trade certificate program graduate with less debt and are often making more than college graduates.

Brian Smith of the Alabama Forestry Commission highlighted the programs that will be offered by the Chilton Natural Resource Council with its $3,500 of grant funds.

“For the past eight years have really kind of honed in on these different programs that we do,” Smith said.

Chestnut Creek Heritage Chapel in Coopers received $5,000 for renovation to the building.

Alabama Senators Clyde Chambliss and Cam Ward and Alabama Representatives Van Smith and Ed Oliver also took part in the event thanking the organization for its support and elaborating on connected projects.

The Maplesville Red Devils faced a tough test defensively against the power running game of Flomaton during a 27-7 loss... read more