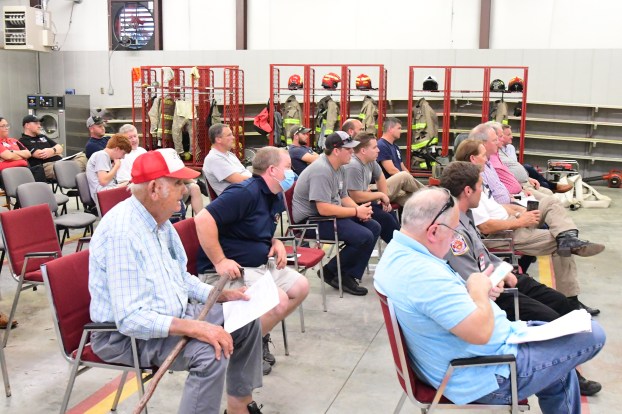 Every volunteer fire department in Chilton County was in attendance at the meeting. (Photo by Anthony Richards)

The Chilton County Firefighters Association meeting on Sept. 3 offered an opportunity for volunteer firefighters to voice their ideas for how to help with recruitment and the betterment of the volunteer fire department system.

Guest speakers at the meeting at Enterprise Station No. 2 included state Rep. Ed Oliver and state Senator Garlan Gudger, who are both part of a joint study group saddled with the goal of figuring out what volunteer fire departments in Alabama need in order to create legislatation to help.

“What we’re here for is to listen to you and draw up some legislation,” Gudger said.

According to Gudger, the meeting was the committee’s first in the state since the joint study group was created.

Much of the talk was about creating incentives that would encourage people in their 20s and 30s to get involved with their local volunteer fire departments. 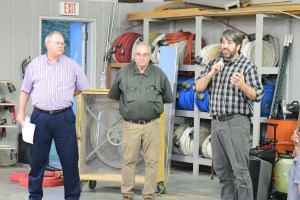 State Rep. Ed Oliver (from left), Butch Billingsley with the county firefighters association and state Senator Garlan Gudger spoke at a meeting at Enterprise Station No. 2 on Sept. 3. (Photo by Anthony Richards)

According to Isabella Fire Department Training Capt. Landon Lowery, one of the first things people ask him when discussing becoming a volunteer fire fighter is “How much does it pay?”

At the moment, the vast majority of volunteer firefighters do not get paid.

Some said that they have been a volunteer firefighter for more than two decades and have never been paid for any of the work they have done.

Lowery even brought up the fact that the incentive can even be helping pay for college tuition or school debt that a fire fighter has accumulated.

He wanted to make sure that he was not asking for a lot, but just some financial assistance that can go a long way in helping fire fighters and their families.

“I will still volunteer at a volunteer fire department because it’s important,” Lowery said.

It was also mentioned that despite recruitment being an issue, it is important to not forget about the veteran firefighters that have put in years of service and continue to do so.

For veteran volunteer firefighters, some sort of tax break was thrown around the room as a viable possibility. 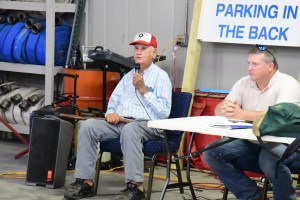 Raymond Hudman (with microphone) spoke at the meeting. He has been a volunteer firefighter for 67 years. (Photo by Anthony Richards)

“This is not just about helping volunteer fire departments but helping the community,” Oliver said. “Surely, we’re all marginally smart enough to think of something we can do better.”

Union Grove Volunteer Fire Department Assistant Chief Lee Headley wanted it to be considered to put more money back into various infrastructure, because not all departments are able to be recipients of grants.

Hudman has been part of a volunteer fire department for 67 years, the past 42 of those has been with the Enterprise Volunteer Fire Department.

It was agreed that a checks and balances system must be in place with the additional incentives, so that not everyone is guaranteed just by volunteering and not putting in the work.

Hardee was happy to see such a meeting taking place.

“This (volunteer fire departments) is a dying breed if you don’t watch out after it,” Hardee said. “This isn’t the time to kick this can down the road anymore.”

Every volunteer fire department in the county had representation show up to the meeting.

For Samantha Turner, this summer has been a little different with many of the camps and events she would go... read more