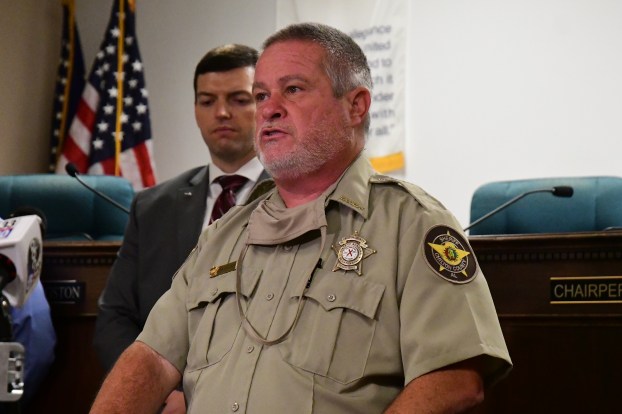 A suspect who shot at police officers during an incident on Aug. 31 is dead.

The suspect has been identified as Robert Earl Jackson, 54, of Thorsby.

At 10:30 a.m., Thorsby Police officers conducted a traffic stop at Montgomery Avenue for a traffic violation.

“He pulled out in front of a pickup truck, and it almost hit him,” Barnett said. “That’s why they made the initial stop.”

“As the officers approached the vehicle the driver produced a handgun and fired on the officers without conversation or warning,” Chilton County Sheriff John Shearon said. “The suspect then fled on foot through a construction site on Montgomery Avenue … the suspect fled into a wooded area continuing to fire shots at the officers. Two Thorsby police officers returned fire.”

Other local law enforcement agencies responded to the scene, including the Chilton County Sheriff Office’s tactical response and K-9 units.

Near 1 p.m., these units entered the wooded area in search of Jackson.

“A short distance inside the wood line, the K-9 located the suspect hiding behind a fallen tree,” Shearon said.

Jackson shot the K-9 in the torso and then fired on the Sheriff’s Office deputies.

The K-9 unit Missile was taken to a veterinarian and will recover. Shearon said the K-9 drew fire and kept the law enforcement officers from walking into an ambush.

“No other law enforcement officers were injured,” Shearon said.

Shearon said the handgun that the suspect had used was found at the scene and had been reported stolen in another county in June.

Jackson had been previously convicted of “numerous violent crimes, the use of firearms and drug offenses” in the past, including “multiple felony convictions for attempted murder, robbery,” according to Shearon.

Jackson was out on bail on drug-related charges and resisting arrest.

“All of the officers and deputies involved in the shooting were veteran law enforcement officers,” Shearon said.

Many had more than 10 years of experience.

“This is an ongoing investigation,” Shearon said. “Additional information may become available however these are the facts as we know them.”

The case has been turned over to the State Bureau of Investigation in accordance with department policy.

Shearon said based on witness statements and evidence, “we have no reason to believe that any of the law enforcement officers involved acted outside of department policy or Alabama law.”

C.J. Robinson of the District Attorney’s Office and Shearon said the evidence, including some video evidence, will be provided to a future Chilton County Grand Jury, according to the District Attorney office policy. Robinson said the next grand jury is in January, and if all of the evidence is ready, it would be presented then. If not, it would be at the following grand jury. Robinson said there might be a wait because of scientific tests that might need to be done.

“The last thing we want to do is to present a grand jury with something less than the whole story,” Robinson said.

“Our thoughts and prayers are with all that have been affected,” Shearon said.