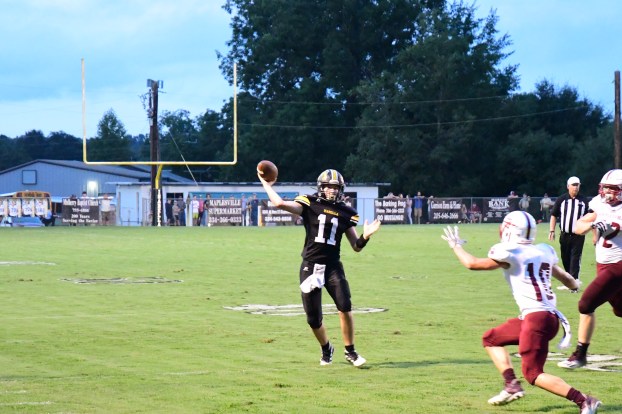 The Isabella Mustangs did not have the lead until the final whistle blew shortly after Jake Logan’s extra point attempt split the uprights to give them a 21-20 overtime victory over Maplesville on Aug. 28.

Isabella found a way to win in the end, despite playing from behind for much of the contest.

“It shows the heart that we have,” Logan said.

Logan connected with Braxden Giles who had snuck behind the Maplesville defense in the back of the end zone.

“I was going to go to the right side, but then I saw the two-safety look shift over so I looked back and saw that my fastest receiver was behind their linebackers,” Logan said.

It was a perfectly placed pass by Logan just over the outstretched arms of the defense and into the hands of Giles.

One thing went through Logan’s mind when he saw Giles break open. 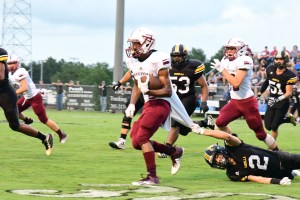 The Mustangs forced overtime after Justin Littlefield scooped up a blocked punt and returned it for a touchdown to tie the game at 14-all midway through the fourth quarter.

Maplesville got the ball and scored first in the overtime period when Jackson Abbott dove across the goal line on a quarterback draw.

However, Abbott’s extra point clanged off the right upright, which kept the door open for Isabella to win the game with Logan’s extra point.

Hobbs made several first down catches throughout the game and some of them included a high degree of difficulty.

Hobbs was also responsible for the Red Devils first touchdown of the game as he scored from a yard out.

Isabella’s offense began to find some consistent success in the second half behind the running of J.J. Wilson, who showcased a combination of speed and tenacity. 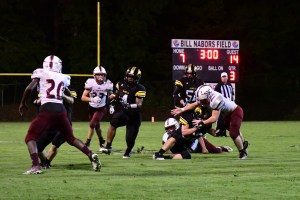 J.J. Wilson (No. 4) provided a spark to the IHS offense. (Photo by Anthony Richards)

Wilson broke free and sparked a scoring drive that tied the game at 7 following a 2-yard touchdown run by Logan.

“I’m just glad my team stepped up and did what we needed to do to get the win,” Logan said. “We really needed it after last week.”

The Red Devils were able to respond quickly though with a one-play drive that was made up of a 71-yard pitch and catch from Abbott to Latrell Wilson, who broke a tackle, tight-roped down the left sideline and then used his speed to outrun the entire Isabella defense.

Both teams have a record of 1-1 on the season.

By BRANDON SUMRALL Special to the Advertiser   A stingy defense and a balanced offense propelled Thorsby to their first... read more