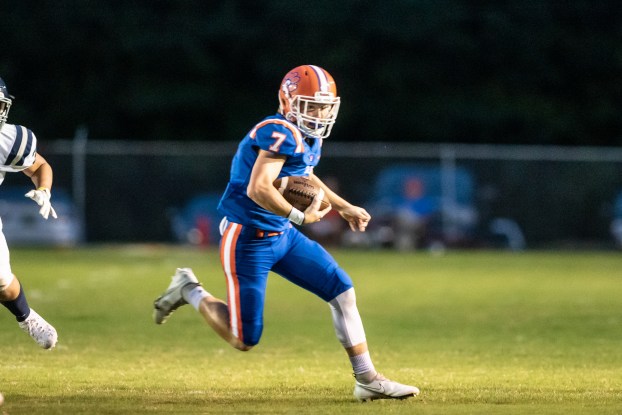 CCHS quarterback Sam Smith looks for yards on the ground against Jemison on Aug. 27. (Photo by Keith McCoy)

Chilton County High School earned football bragging rights over Jemison for the next 365 days following a 34-16 victory on Aug. 27.

The Tigers were led by a powerful rushing attack that featured doses of carries for Kevin Staffney Jr., Jakobe Worthy, Jaberrius Peake and Demarcus Riddick.

Staffney Jr. was the workhorse of the group and at times looked like a pinball bouncing off Jemison defenders with his hard-nosed running style.

CCHS wanted to establish the running game early and the backs had holes to run through against Jemison thanks to the play of the offensive line in front of them.

According to Maywell, the offensive line was working as one unit throughout the game, which is something he wants to see continue moving forward.

“Over the course the relationships have really started to build,” Maywell said. “It’s building more every single week. We’ve still got a lot to work on, but we were able to run the ball pretty good.” 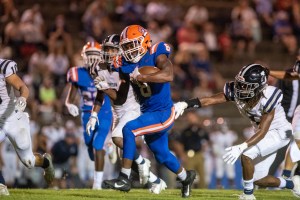 Even though CCHS controlled much of game, it was Jemison which jumped out to an early 7-0 lead after a 65-yard touchdown connection from James Wright to Tyriq Archer.

Archer high-pointed the deep ball down the right sideline and won jump ball battle against the CCHS defender.

However, the Tigers quickly swung the momentum their direction with Peake taking the ensuing kickoff the distance for a touchdown to tie the game at 7-all.

Peake exploded through Jemison’s kickoff coverage like he had been shot out of a cannon on his way to the end zone.

CCHS head coach Tal Morrison was happy with the resiliency his team showed all night.

“They had an opportunity there were they could have caved and dropped their heads, but they did a good job all night of fighting,” Morrison said.

A safety gave CCHS a 9-7 lead early in the second quarter and the Tigers never looked back. 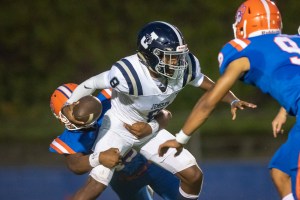 Worthy capped a drive with a two-yard touchdown run, while Staffney Jr. took advantage of a short field with a 20-yard jaunt of his own to extend the Tigers lead 21-7.

“We’ve got Kevin, who runs his butt off and two young running backs that are learning to run the way we want to run,” Morrison said.

Jemison put together a methodical drive that took roughly five minutes and got all the way to the CCHS 5-yard line.

However, the Panthers had to settle for a field goal and trailed 21-10 at the halftime break.

Jemison opened the second half with possession but turned it over and once again allowed the Tigers to set up on their side of the field.

CCHS scored a couple of plays later when Sam Smith hit Jakeveon Bolding, who had gotten behind the defense, for a touchdown pass to grow the lead to 28-10.

Jemison’s Hayden Robinson came in to play quarterback for the Panthers during the third quarter, as they tried to change things up and create a spark offensively.

The spark never came, as the CCHS pass rush was instead able to pin its ears back and provide overwhelming pressure on Robinson in obvious passing downs for the Panthers.

Cordell Baker intercepted a deep pass on the first play of the fourth quarter and Riddick helped tighten the screws on the victory with a touchdown run.

The Panthers continued to fight and after a long kickoff return, Robinson culminated a drive by finding the end zone with a quarterback power run to cut the deficit to its final margin of 18 points.

“We got our butts whooped last week, but after watching the film we weren’t quite as far off as people may think by looking at the score,” Morrison said. “A lot of it is our mindset, if we get to the point where we get that right and play physical like we did tonight, we’ve got the chance to compete with the best.”

Wright shines in transition to quarterback

James Wright is continuing to learn the quarterback position, but after one game as a starter, he showed that he... read more