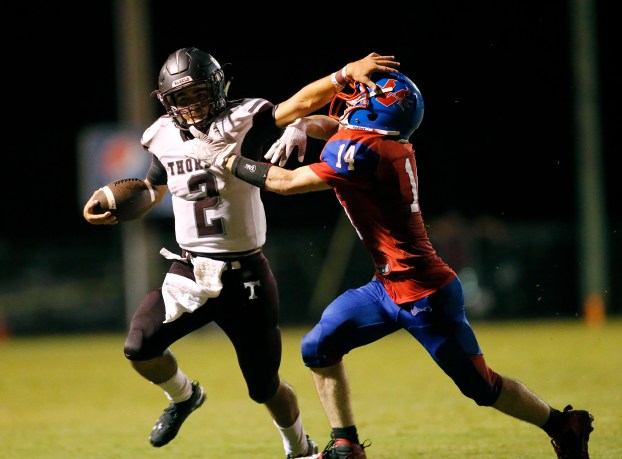 A stingy defense and a balanced offense propelled Thorsby to their first victory of the season on Aug. 28, as the Rebels took to the road and picked up a 38-15 win over the Verbena Red Devils.

The Rebels wasted little time putting points on the board as Thorsby would take the opening kickoff and would set up for their first possession of the night at their own 45.

Eight plays later and a 12-yard connection from quarterback Brody Barnett to Luke Davis would make it a 7-0 Thorsby lead, with the two connecting again for the two-point conversion, the Rebels would jump out to an early 8-0 lead.

A pair of scoreless possessions by both teams would see Verbena take over for their second possession of the night at their own 36, where quarterback Jared Quinn would go to work.

A pair of completions by Quinn to Zion Smith and D.J. Jackson would move Verbena down inside the Thorsby red zone where two plays later Quinn would find pay dirt to make it a 8-7 ballgame early in the second quarter.

Another round of scoreless possessions by both teams would lead to a Red Devil punt that would see the Rebels take over at their own 48-yard line.

A.J. Smith would be the Thorsby work horse on this possession as a run of 20 yards would move the Rebels down to the Verbena 27, where one play later Smith would punch in into the end zone to put Thorsby up 16-7 late in the second.

Verbena would waste no time answering with a score of their own as a 41-yard touchdown scamper by Quinn would cap off a four play 63-yard scoring drive to again make it a one-point game, 16-15 late in the first half.

Thorsby however, would refuse to go quietly to the halftime break and would set up their ensuing possession at their own 32-yard line with three mintues remaining in the half.

Eleven yards by Davis, 21 from Barnett and a 27-yard completion from Barnett to Davis would set Thorsby up first and 10 at the Verbena 19.

Five plays later with eight ticks left on the first half clock and Barnett would send the game to the halftime break with Thorsby holding a 24-15 lead. 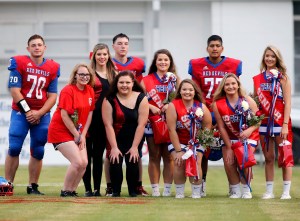 Verbena honored its seniors prior to the game. (Photo by Brandon Sumrall/Special)

Verbena looked poised to go three and out to start the third quarter, but a fake punt by Nathaniel Morris would be advanced 29 yards for a Red Devil first down and would set Verbena up first and 10 at the Thorsby 30.

Three plays later on a third and 13, the drive would come to a halt on a pass attempt by Quinn that would be picked off by Brody Mims to turn the ball over to Thorsby first and ten at their own 10 yard line.

The poor field position would do little to hinder the Rebel offense as big runs by Barnett, Smith, and Davis would propel a 90-yard, 13-play scoring drive that would be capped off on a 20-yard connection from Barnett to Mims that would make it a 32-15 Thorsby lead with 3:50 remaining in the third.

Thorsby would add one more score on the night as with 10:52 to remain in the game.

Jamario Montgomery would bring the game to its final score of 38-15 with a 13-yard touchdown run that would put a feather in the cap of the Rebels for their first victory of the young season.

“The win means a lot and a lot of the young kids got to play. Verbena came out playing really hard,” said Thorsby head coach Daryl Davis.”We told our kids they were going to do that. You come down here to play, they are going to play hard. We went in and made some adjustments at the half with the defense because we were having some problems and they came out in the second half and did what we asked of them. They played hard and some of our young kids got some playing time. It’s a good night.”

Smith led the Thorsby rushing attack with 119 yards on 10 carries with a touchdown, while Barnett added 87 yards with a touchdown as well as 112 yards through the air on 10 completions and a pair of touchdowns.

Quinn led for Verbena on the ground with 86 yards on 16 carries as well as 78 yards through the air on eight completions.

By JOYANNA LOVE/ Managing Editor Students at the Verbena Annex will have a new resource when school starts after the... read more