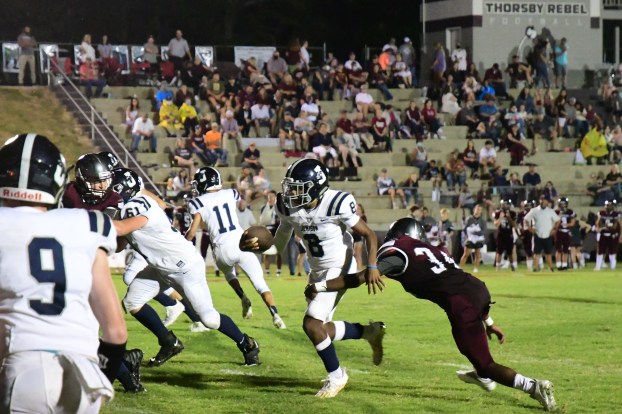 Jemison’s James Wright fights through initial contact during a run against Thorsby on Aug. 20. (Photo by Anthony Richards)

Wright shines in transition to quarterback

James Wright is continuing to learn the quarterback position, but after one game as a starter, he showed that he may be just what Jemison has been looking for.

He helped lead the Panthers to a 35-8 victory on the road against Thorsby in the North Chilton Clash.

Despite giving Jemison fans bragging rights over Thorsby for the next year, his performance also demonstrated that he has a knack for making plays even at a position he has only been playing for the past couple of months.

“At the beginning, he really didn’t want to be quarterback, and I had to talk him into it,” Jemison head coach Blake Bradley said. “Now he loves it.”

With one game under his belt as the starting quarterback, Wright is happy with his decision.

“Throughout the summer, I was pretty much focused on receiver, but after our backup quarterback ended up leaving, coach called me and asked if I wanted to step up to the plate and be a quarterback,” Wright said. “This summer I’ve been going to camps and have put in a lot of work to get myself ready for the season.”

Wright earned the starting job after battling with Hayden Robinson throughout camp.

Both players spent time at quarterback in the first game, with Robinson coming in during the third quarter and orchestrating a drive that included a couple of beautifully placed passes, one of which would have resulted in a touchdown to Wright if not for a penalty.

The options that both players give the Jemison coaches at their disposal is what every coach hopes for.

“James has been putting in the work and doing everything you want as a coach,” Bradley said. “Late in the summer he was able to win it. It’s a good situation to be in as a coach, because he’s just as good of a receiver as he is a quarterback.”

The JHS coaching staff showed their trust in Wright by turning to him in their time of need, which provides him the confidence needed to make the transition a successful one.

“I’ve been dreaming about playing football ever since I was young,” Wright said. “I’ve always wanted to have the opportunity to make it to the highest level. I just want my town to remember me as someone who really put in the work and the effort.”

A late defensive stand by the Maplesville Red Devils cemented a 28-20 victory at home in the 2020 season opener... read more