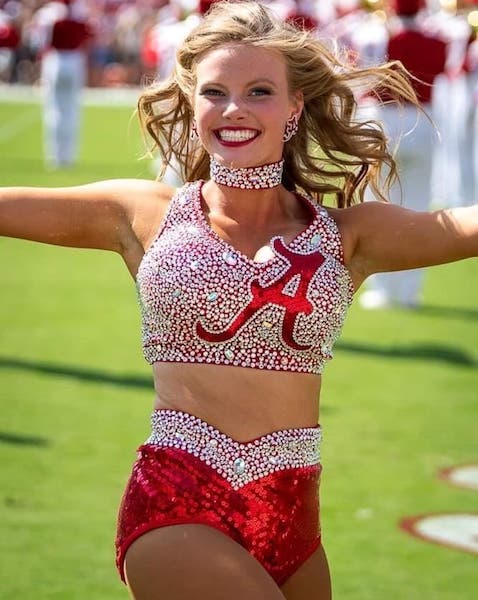 This week, Alabama Football announced its new SEC football schedule for the 2020-2021 year. Alabama Football has become a symbol of pride on a national level, winning championships and striving for the ultimate golden trophy and recognition. Those on the field and spectators from around the world have been eagerly preparing and waiting to hear what football schedules would be like amid 2020’s COVID-19 outbreak. Anna Calhoun of Clanton has also been anticipating the news of the 2020 football schedule. Calhoun, age 21, is an Alabama Crimsonette and has twirled for the Million Dollar Band during her four years at Alabama. Now in her senior year with hopes of making her last year most memorable, her mind is at ease that “the show will go on!”

“We (Alabama Crimsonettes) have continued to practice up to two hours every day, six days a week,” said Calhoun. “We practice on the turf, which is about five degrees hotter. It is hard work, but the reward is definitely worth it. There isn’t anything like being in Bryant-Denny Stadium!”

Calhoun began twirling at the age of four. The interest of twirling came from her mother, Sherri Calhoun, who also twirled.

“I continued to twirl, and when I was a freshmen in high school, I realized being a Crimsonette was something I would like to do. So I practiced more and talked to twirl coaches who had Crimsonette experience,” said Calhoun.

Calhoun became a Crimsonette in 2017 and has performed for Alabama Football the last four years.

“Being a Crimsonette has been an amazing experience!” she said. “We have traveled around the country including New Orleans for New Year’s Eve. We went to California and got to see landmarks such as the Golden Gate Bridge and the house on the TV show, “Full House.” We got dressed in the Colt’s NFL locker room in Indianapolis. This has been an amazing opportunity for me!”

Calhoun has also enjoyed the opportunity to meet several people at the University of Alabama including Alabama President Dr. Stuart Bell and Athletic Director Greg Byrne, who have been key encouragers during her time there.

One of Calhoun’s most memorable Crimsonette moments was during the Alabama-LSU game in 2019, in which President Donald Trump was in attendance.

“It was Veteran’s Day, and we performed a special veteran’s themed-show for the crowd,” said Calhoun. “Everyone in the stadium was filled with patriotism for our country. It was a wonderful thing to witness and be a part of.”

The University of Alabama has taken extra measures to try to lessen the spread of COVID-19 this year, including mask-wearing, individual water bottles, hand sanitizer for band members while also dividing the Million Dollar Band into two groups for practice.

“Dividing the band into two parts has been the most different thing about this year,” said Calhoun. “There is a Monday/Wednesday group and a Tuesday/Thursday group that practice at different times. So I am eager for us to come together and perform.”

Calhoun is one of 24 Crimsonettes on the field. She encourages anyone that has an interest to practice and compete.

“Being a Crimsonette is a sisterhood,” she said. “I have made best friends here.”

Calhoun has also managed to form a “home away from home,” while being at Tuscaloosa.

“All of my roommates have been from Chilton County including Kendal and Katelyn Lambert, Avery Wyatt and Ashley Beth Jones,” she said. “It is nice to get dinner or go bowling with people you know and stay in touch.”

Calhoun is projected to intern at KPMG Accounting in Birmingham during Spring of 2021 and graduate from the University of Alabama in May 2021. She plans to work on her master’s degree in accounting afterward.

She is the daughter of Jason and Sherri Calhoun.

By ELISABETH ALTAMIRANO-SMITH/ Community columnist During the current times of social media obsessiveness, most of the world will agree that... read more