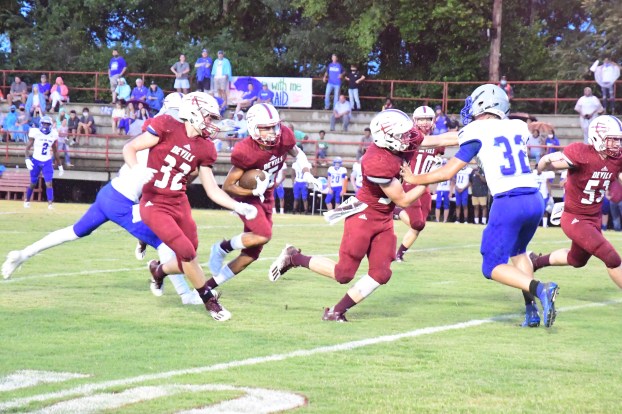 Payton Cook of Maplesville (No. 5) looks for return yards after an interception. (Photo by Anthony Richards)

A late defensive stand by the Maplesville Red Devils cemented a 28-20 victory at home in the 2020 season opener against Highland Home on Aug. 21.

The game-clinching stop came following a lightning delay with less than three minutes to play in the game and Highland Home driving into Red Devil territory.

It was a back-and-forth contest from the start with both teams trading blows in a highly competitive game. 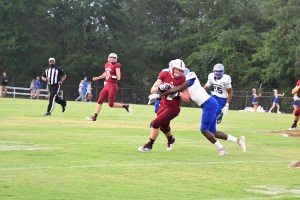 Maplesville’s Cole Gray fights for yards after hauling in a reception. (Photo by Anthony Richards)

After Highland Home hit a deep touchdown pass on the third play of the game, the Red Devils answered with a methodical drive on their first offensive possession.

The drive was capped by a touchdown run as senior quarterback Jackson Abbott used his lengthy frame to stretch the ball over the goal line to give Maplesville a 7-6 lead.

The lead would remain Maplesville’s for the rest of the game.

Payton Cook, Abbott and Caleb Hobbs each picked off the Highland Home quarterback. Abbott returned his 80 yards the other way for a pick-six and Maplesville’s second score of the night. 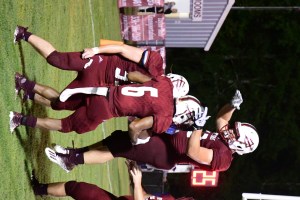 Abbott orchestrated another scoring drive before the half as he connected with Hobbs for a nice pitch-and-catch down the right sideline to move the Red Devils inside the opponent’s 20-yard line.

Fellow senior Latrell Wilson took it from there as he ran off left tackle and was able to waltz into the end zone not long after he broke past the line of scrimmage and into the secondary.

Maplesville led 21-12 at the halftime break.

The Red Devils got the ball to open the second half and found success right away.

Abbott showcased his pocket awareness as he spun out of a would-be sack and kept his eyes down field while rolling away from the pressure.

The result of the broken play was a fourth Maplesville touchdown, as Abbott rolled to his left and threw across his body to find a wide-open Cook who caught the pass and scampered into the end zone.

The Red Devils entered the fourth quarter ahead 28-20, which remained the score throughout the final quarter of play.

CCHS shut out in season opener

By BRANDON SUMRALL Special to the Advertiser The 2020 football season brings forth reclassification for Chilton County High School as... read more