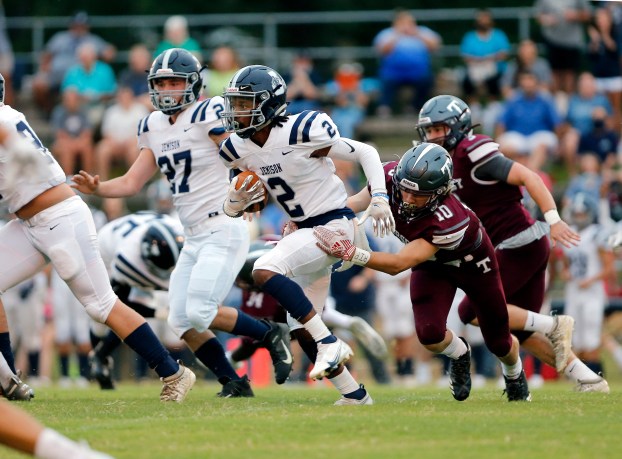 Jemison’s Josh Gilliland (No. 2) attempts to run through the tackle of Thorsby’s Remington Taylor (No. 10) during the 2020 North Chilton Clash on Aug. 20. (Photo by Brandon Sumrall/Special)

The Jemison Panthers started the 2020 season off on the right foot with a 35-8 victory in the North Chilton Clash against rival Thorsby Aug. 20.

JHS was led by a masterful performance on the road by junior James Wright, who started the first game of his career at quarterback.

Wright was a dynamic presence with the ball in his hands and did an excellent job making plays through the air and on the ground.

“It was all about staying focused and bringing an intensity to the game,” Wright said. “Doing anything we have to make sure we came out with the win.”

In previous years, Wright had primarily spent time at wide receiver, but he won the quarterback battle in preseason practice and earned the starting job.

Although Wright played well against the Rebels, he knows that he still has plenty to learn as he continues to adjust to his new role as the team’s signal-caller.

“For my first game I did good, but we still have a lot of work to do,” Wright said. “I’m not done, and we’re trying to chase a championship.”

Both teams scored on their first offensive possessions of the contest with Jemison scoring first followed by a methodical drive by Thorsby that ended when Brody Barnett connected with fellow senior Sawyer Sellers on a swing pass for a touchdown.

Barnett lobbed a pass up to Sellers, who used his height to go up and grab the ball, for the two-point conversion as the game was tied 8-all early on. 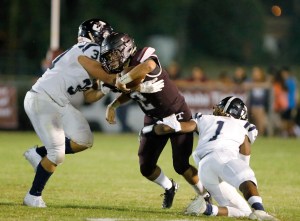 After Thorsby scored on its opening drive, the Jemison defense pitched a shutout the rest of the game. (Photo by Brandon Sumrall/Special)

However, that was the only score the Rebels could muster as Jemison began to slowly take control of the game from that point on.

Wright and Josh Gilliland each had rushing touchdowns in the game.

Gilliland started in the secondary and also contributed with some nice runs on the offensive side of things.

Gilliland showcased his power as well as his quickness on his touchdown run, as he got walloped by Sellers at the goal line but was still able to punch it in to give the Panthers a 21-8 lead at halftime.

The defense took over in the second half and kept the Rebels at 8 points the rest of the game.

Jemison even scored a touchdown defensively after Luke Mitchell jumped on a fumble in the end zone in the fourth quarter to punctuate the night.

“I knew it was going to be a little bit of a learning curve early on (defensively) and it took us about a quarter to really get adjusted, but once we did I feel like we were able to get some consistency and they were able to settle in and play,” Jemison head coach Blake Bradley said. “Our goal was holding them (Thorsby) to 13 or 14 points and we were able to reach that goal. I’m proud of them.”

By JOYANNA LOVE/ Managing Editor The Chilton County Board of Education received an overview of the budget proposal for the... read more