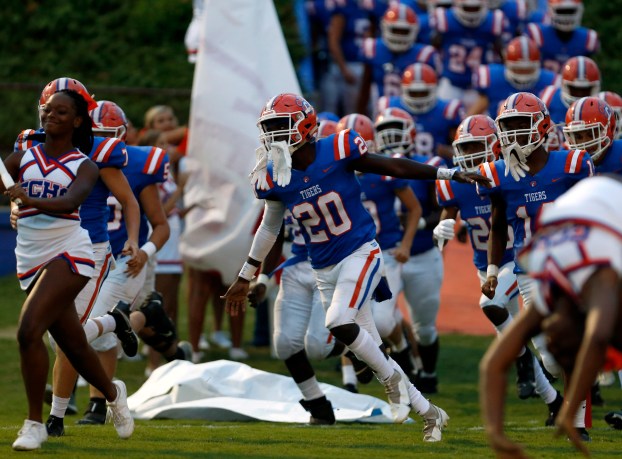 The Tigers enter onto the field prior to the season opener Aug. 21. (Photo by Brandon Sumrall/Special)

CCHS shut out in season opener

The 2020 football season brings forth reclassification for Chilton County High School as the Tigers make the jump to Class 6A.

To kick off the new season, the Tigers went one more round at the 5A level by playing host to two-time defending state champion Central Clay Volunteers.

While the Chilton County defense kept the Tigers in the game early, a lack of offense spelled doom as the visiting Vols would invade Tiger stadium and pick up a 35-0 victory on Aug. 21.

A pair of scoreless possessions by both teams to start the contest proceeded the Vols second possession of the night that would start near midfield.

A seven-play 53-yard scoring drive ended with a six-yard touchdown carry by Elisha McNeil that put Central Clay on the board 7-0.

A pair of runs by Kevin Staffney would give the Tigers a first down to start their ensuing drive, but an incomplete pass on third and seven forced the Tigers to punt and Central took over at their own 12.

The poor field position would do little to hinder the visiting Vols as six first downs and 88 yards later, Terry Heflin would go in from six yards out to make it a 14-0 Central Clay lead with 1:38 remaining in the first quarter.

Another a quick three-and-out for Chilton County setup the Vols offense at their own 34-yard line where quarterback Boyd Ogles and the Central Clay offense got to work.

A pair of passes from Ogles to Jameion Hunter would give the Vols a pair of first downs while moving the ball out across midfield where two more completions from Ogles would set Central Clay up first and 10 at the Tigers 23-yard line. 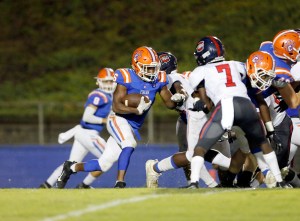 Two plays later and Heflin found the end zone once again to bring the game to its halftime score of 21-0.

Runs by Staffney along with a 10-yard completion from Sam Smith to Jakeveon Bolding propelled the Tigers across the midfield stripe in their first possession of the second half.

However, the Tigers drive would stall at the Vols 39 where a failed fourth and 14 would turn the ball over to Central Clay.

A muffed punt reception by the Tigers saw Central Clay recover the fumble at the Tigers 29.

One play later, Helfin broke through the Chilton County defense and scampered 29 yards for another Vols Touchdown.

Following another Chilton County three-and-out and punt, McNeil broke loose for a 53-yard touchdown carry that extended the Vols lead, 35-0.

With Central Clay holding a commanding lead and the game nearing the midpoint of the final period of play, lightning would set in on Tiger Stadium resulting in a mutual agreement between the two teams to forgo the remaining 8:35 for the fourth quarter sealing a win for the Vols, while sending the Tigers in to rivalry week against Jemison with a sour taste in their mouth.

McNeil led the Vols with 145 yards and two touchdowns on 12 carries.

The Jemison Panthers started the 2020 season off on the right foot with a 35-8 victory in the North Chilton... read more