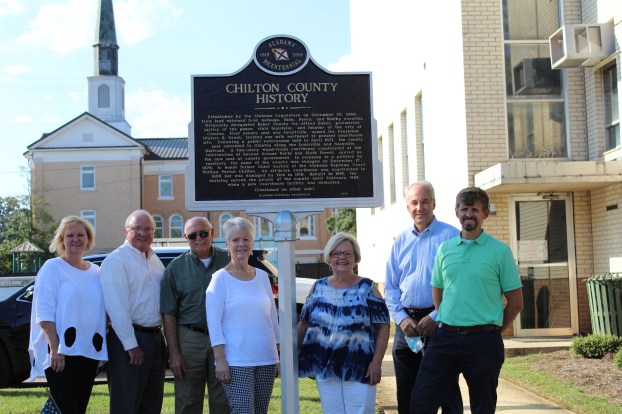 Members of the Chilton County Chamber of Commerce and Chilton County Sesquicentennial Committee gathered next to the new historical marker. (Contributed photo)

A recap of Chilton County’s founding history is now commemorated with a marker next to the county courthouse.

The historical marker was paid for by a grant the county received as part of the Alabama Bicentennial commemoration.

“They encouraged counties to erect markers such as this,” Chamber President Billy Singleton said.

The marker highlights how the county got its name and offers historical tidbits about the area, including its geographical significance as the center of the state.

According to Singleton, the marker looks at home next to the courthouse, which serves as the governmental heart of the county.

“That’s the obvious place for it to be,” Singleton said. 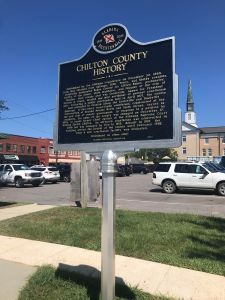 The recently erected marker highlights Chilton County’s history and is located next to the courthouse. (Contributed photo)

One of the more difficult aspects of the process for those involved was fitting the 150-year history of Chilton County within a limited amount of words.

“These markers take a little bit of time to produce,” Singleton said. “We went over the text several times to make sure it was accurate.”

As a result, both sides of the marker are used to help tell the county’s story.

“Our history tells us who we are, and it’s a very unique history,” Singleton said. “We hope this encourages people to do some more research about it themselves.”

Local residents and visitors go to the courthouse every day during the week.

“We hope it stands for many, many years,” Singleton said.

The election season is upon us, which means voting both in-person at the polls or with a mail-in ballot. Those... read more