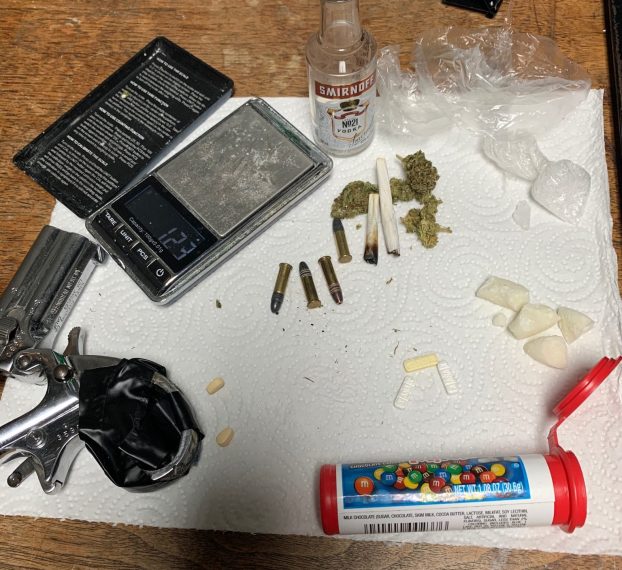 Marijuana, assorted pills, a container with drug residue, digital scales, Xanax, cocaine and methamphetamines were found in the vehicle of Robert Earl Jackson during a traffic stop on Aug. 16. (Contributed photo)

The Thorsby Police Department had a busy weekend getting drugs off the streets.

According to Thorsby Police Chief Rodney Barnett, Justin Smitherman and Patrick Young conducted a traffic stop of a vehicle for improper lights at the intersection of County Road 29 and Highway 31 around 10:55 p.m. on Aug. 14.

The driver of the vehicle was John Ellis Jr., and while talking with him officers allegedly smelled an odor of marijuana coming from inside the vehicle.

According to Barnett, after investigating further, the officers observed a clear plastic bag in one of Ellis’s pockets.

Officers also interviewed the vehicle’s passenger, Brooklyn J. Martin, and after talking with both suspects they determined Martin was also in possession of illegal drugs. 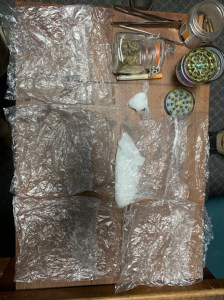 “I am very thankful for the two officers for their work and dedication to keep our communities safe,” Barnett said.

Another drug bust took place on Aug. 16 around 2:14 a.m. when Young conducted a traffic stop at Montgomery Avenue and Lincoln Street West.

The vehicle was driven by Robert Earl Jackson who was detained for further investigation after Young allegedly smelled marijuana and alcohol coming from the vehicle.

According to Barnett, Young’s investigation found that Jackson was in possession of marijuana, assorted pills, a container with drug residue, digital scales, Xanax, cocaine and methamphetamines.

Jackson also had a loaded .22 Magnum handgun, which was a violation as a former felon.

“This officer [Young] seized very dangerous drugs and a firearm that would have likely caused harm on the streets,” Barnett said.

Connie Bainbridge was recently awarded the Chamber of Commerce Association of Alabama’s Chamber Partner award. She is the inaugural recipient... read more