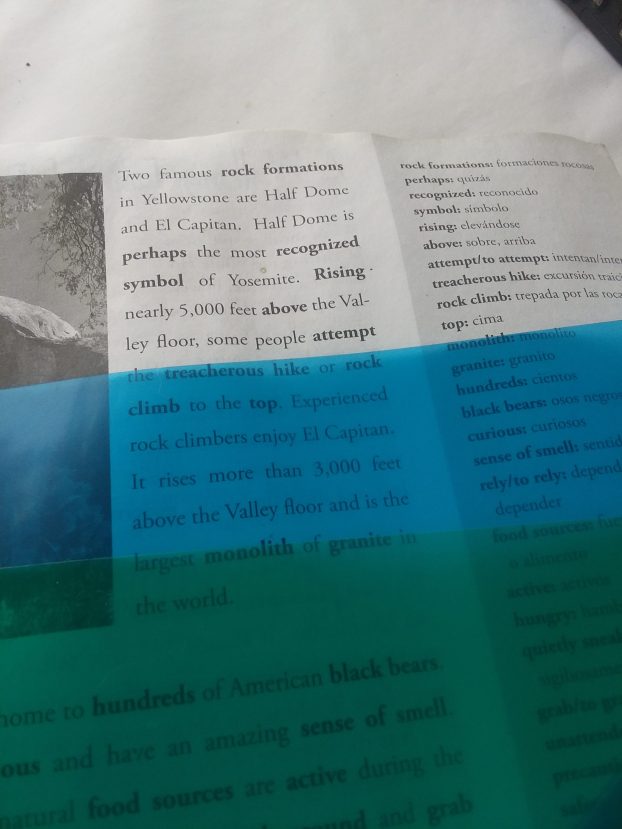 Colored overlays make words on a page clearer to those with Irlen Syndrome. (CONTRIBUTED)

Faye Collins, who has a master’s degree in education and began teaching in Chilton County in 1984 first heard of Irlen Syndrome in 1989. One of her children, that was in the second grade at the time, began having difficulty with class instruction.

“The students were supposed to write words within a circle, and I could see that he was struggling to do that,” said Collins.

Collins set out to find a solution and heard about Irlen Syndrome. Irlen Syndrome (also referred to as Scotopic Sensitivity Syndrome or Visual Stress) is a perceptual processing disorder. It can affect a person in many different areas of their life including academic and work performance, behavior, attention span and the inability to sit still and concentrate.

Those with the syndrome have a high sensitivity to brightness and stark white paper. Fluorescent lighting can also be a trigger. Staring into the brightness can cause the affected individuals to become restless, have headaches, slowed comprehension, slowed reading and difficulty copying. Nearly 50 percent of individuals with reading or learning disabilities have Irlen Syndrome.

“During my son’s exam, he was given a piece of paper with different colored plastic overlays,” said Collins. “The tint of the overlay acts as a shield for the reader so that it isn’t as bright and they are able to read.”

The overlay helps for printed material, but specialized tinted glasses are also needed when the person is outdoors and out of the classroom setting. Lowering the brightness and color hue on computers can also help.

Faye Collins became a Certified Irlen Syndrome Screener in 1989 and was recertified January 2020.

“The exam is two and a half hours long,” said Collins. “The point is to make their eyes tired and then give the exam. Small print is given with a colored overlay, and I ask them if the tint is ‘bigger, better and brighter.’ Doing that will help each person find their correct color.”

Colored overlays are unique to each individual and may change throughout the years.

“My son’s overlay was initially dark blue but has now changed. On glasses, one lens can even be a different color than the other,” Collins said.

“As a teacher, I started keeping overlays in the back of my classroom so that students who needed one could use it during class,” Collins said. “Some of the students that used them asked me why all teachers didn’t have them available. The overlays and glasses can be expensive. After one of my second graders was diagnosed, his grandmother couldn’t afford the frames and glasses, so she purchased the overlays and made her own and it worked! Now that student can see bigger, better and brighter.”

For more information or to schedule an Irlen exam, contact Collins at 205-217-6869 or visit www.irlensyndrome.org.

By JOYANNA LOVE/ Managing Editor Ordinarily, this week see local students returning to the classroom. No one will ever call... read more