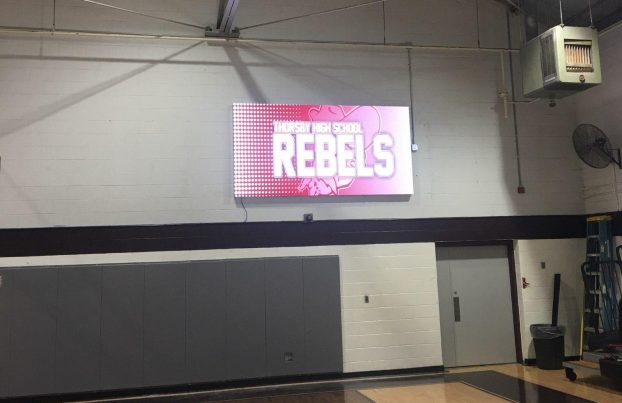 A 5-foot by 10-foot video board was added to the interior of the Thorsby High School gym. (Contributed photo)

Thorsby High School’s gym continues to receive updates with the latest being a 5-foot by 10-foot video board.

“Nobody has one around here that I know of,” Thorsby Principal Corey Clements said.

The board was installed by Boostr Displays, which the school also partnered with about two years ago when it purchased its new scorer’s table.

The scorer’s table has shown a rotation of advertisements on its video board that serves as a source of funding for the school and Boostr Displays.

According to Clements, Boostr Displays has given back more than $400,000 to Alabama high schools through its revenue-sharing program.

Thorsby was able to use these funds to help purchase the new video board. It was financed entirely through donors and ad sales.

“They are an awesome company,” Clements said. “They give back and are doing it for the right reasons.”

He stated that one ad on the scorer’s table video board gets an estimated 20,000 views per season. The same will be the case for the video board. 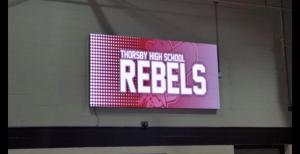 Thorsby continued its partnership with Boostr Displays for the installation of the video board. (Contributed photo)

There are many ways that the school could be creative with how they choose to use the video board to add to their gameday atmosphere. Clements even expressed the possibility for movie nights in the future.

“It’s great because it’s a money-maker, but it’s also promotes our school,” Clements said. “Just think about what you could do with something like that at pep rallies.”

According to Clements, players for both the basketball and volleyball teams have already expressed lots of interest in the ability to make highlight packages to play on the board as the starting lineups are announced prior to a game.

Clements first heard about Boostr Displays after speaking with Billingsley School about their scorer’s table and who they worked with to get it.

After further research, it did not take long for Thorsby to begin its own relationship with the company.

“It was a no-brainer for us,” Clements said.

The video board has high definition picture capability and can be controlled wirelessly.

Thorsby’s gym also hosts the North Chilton Youth Basketball League, which would be able to utilize the video board.

With the presentation of the final draft of the 20-year Interstate 65, Exit 212 master plan for the area, attention... read more