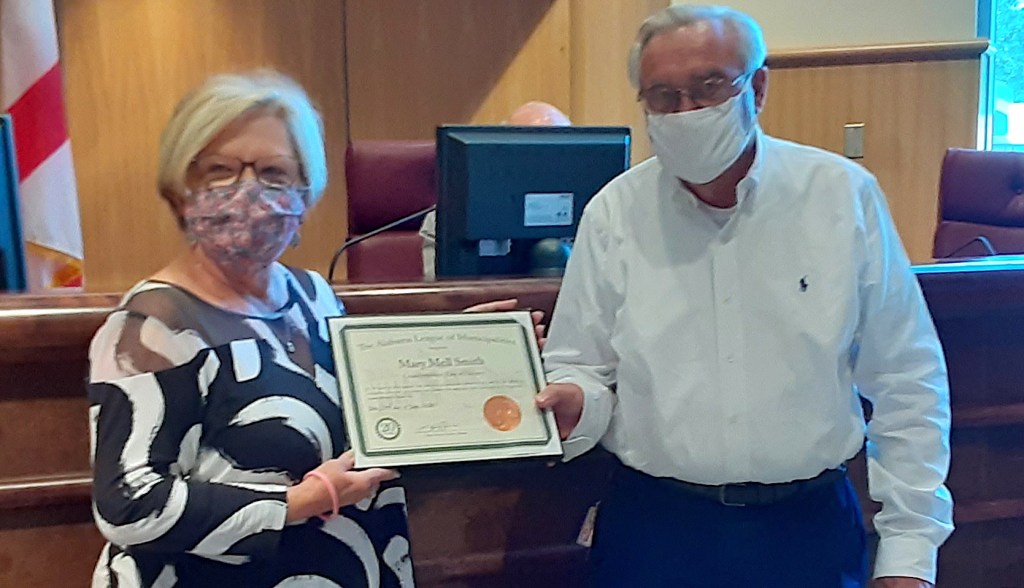 Mary Mell Smith was presented with a certificate from the Alabama League of Municipalities. (JOYANNA LOVE/ ADVERTISER)

The Clanton City Council is moving forward with a plan to make the city’s sidewalks more presentable following a vote at the July 27 voting session.

Councilwoman Mary Mell Smith proposed the city pay for pressure washing sidewalks in the downtown area that had not already been cleaned by business owners.

After community members expressed concerns about grass growing through some of the sidewalks in the city at a previous meeting, Mayor Bobby Cook had asked Smith to get a committee together to come up with a plan. Smith said she had discussed the issue with Whitney Barlow of the Industrial Development Authority and Billy Singleton of the Chilton County Chamber of Commerce to develop a starting point.

Smith said they wanted to start in downtown to “at least show the merchants that we want to fix up downtown and make it look good.” She said she knew there were sidewalks needing attention throughout the city, but “we have got to start somewhere.”

An estimate from a company to do the power washing was presented for about $9,000.

Councilman Sammy Wilson said he had been unaware that a committee was meeting. He suggested starting by the city limit sign to address issues where visitors are getting their first impression of the city.

An audience member later commented that grass was high in that area and made a bad impression. Smith said the grass would be taken care of by city employees as they have time.

She said addressing issues with sidewalks in that area could be the next phase.

Wilson had made a motion to table a vote on moving forward so more information could be presented. This motion failed for lack of a second.

“I agree that all of it is important and all of it needs to be done, but we’ve got to start somewhere like Councilwoman Smith said,” Councilman Awlahjaday Agee said.

A motion to move forward with the project was approved 4 to 1 with Cook, Smith, Price and Agee voting in favor. Wilson voted against.

During the meeting, Smith was honored for 20 years of service to the city as a Council member with a certificate from the Alabama League of Municipalities.

Cook gave the Council an update on the 28 condemned houses the city received a grant to demolish. He said the city had a contract with someone to do the title work, but this could not be complete until the county computer system is fully accessible again, which should be soon.