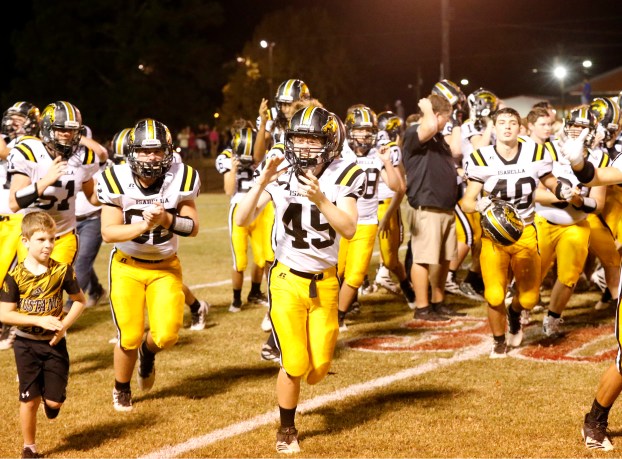 The sidelines at football games this fall will look a little different with players asked to keep a distance between each other. (File photo)

The Alabama High School Athletic Association has rolled out its list of modified rules and best practices that will be implemented once the fall sports seasons begin.

AHSAA Executive Director Steve Savarese continually stated during a video conference on July 23 that the situation will remain fluid and updates to the rules will be made as needed.

“If we receive new information from the department of health, sports could change almost immediately,” Savarese said.

For football, the team box on each side of the field will be extended from both 10-yard lines in order to create more space to distance, while cloth face masks and gloves will also be allowed.

All timeouts and transition periods following scoring plays will be lengthened to two minutes.

The AHSAA adopted the best practices issued by the National Federation of State High School Associations, which states everybody should maintain a six-feet span from each other when in the team box. This would obviously not be required of anyone competing in the field of play.

Uniforms, towels, equipment and water bottles are not recommended to be used by more than one individual, and the game ball will need to be sanitized routinely.

“These best practices will not eliminate the risks, only mitigate them,” Savarese said.

Volleyball teams will not switch benches after each set, unless the officials deem there is a clear disadvantage created by not doing so.

Players must also space out three to six feet while sitting on the bench and there will be a designated “substitution zone” for players to go to when subbing into the game.

Cloth face masks and gloves will also be allowed for volleyball.

Ticketing for each event will be up to the host school and may vary depending on the rules of the county where the game is being played.

Whether fall sports are played will be decided on a school by school basis, while parents will decide whether or not their child will be allowed to play.

Savarese stated that the possibility for play being stopped and started is realistic if new information comes out that prompts such actions to be taken.

“Sports this season will not be normal,” Savarese said. “Our board has allowed schools to play or not play without penalty.”

All sports have been allowed to practice since June 4 following the guidance of Gov. Kay Ivey.

According to AHSAA Assistant Director Denise Ainsworth, the NFHS, NCAA and CDC were some of the groups they consulted during the decision process.

She instructed that it will be up to the coaches and educators to keep up with any changes made to the rules and to educate their players about them.

What to consider when choosing a football helmet

Playing sports can be both exhilarating and fun, but there also exists a certain possibility for injury. In football, a... read more