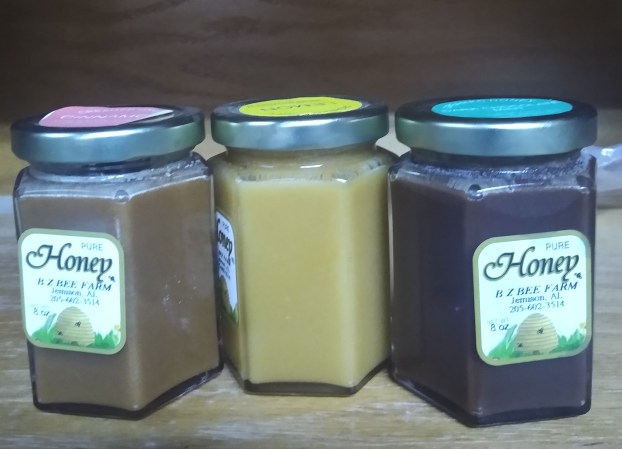 Creamed honey is made by speeding up the crystallization process. (CONTRIBUTED)

Honey has been used for many things through the ages, and beekeepers keep getting creative with what they have to offer.

Local beekeeper Larry Wyatt of Jemison began experimenting with creamed honey after hearing about it at a beekeeper conference.

“That piqued my interest in it,” Wyatt said.

He said making creamed honey gives him an additional product to sell instead of just selling the straight honey.

“All honey will crystalize over a period of time, creaming honey is a process that causes it to crystalize quicker,” Wyatt said.

This sped up crystallization creates a smooth thick texture that Wyatt compared to peanut butter.

“It is still raw honey it is just put through this further process,” Wyatt said.

He said the process does slightly change the taste of the honey, making it milder.

When someone suggested he make a chocolate creamed honey, Wyatt gave it a try and began looking into other possible flavors.

He had also tried blueberry, peach and apple pie.

The organic peach powder used proved to be a disappointment. Wyatt said it took a lot of the powder to get even a slight peach taste, so he has not made that kind again.

“I use organic ingredients for the flavorings,” Wyatt said. “People love it.”

His personal favorite is the dark chocolate mint. He compared the taste to a mint candy covered in chocolate.

“I could just eat it out of the jar,” Wyatt said.

Last year, Wyatt tried making a peanut butter flavor for the first time after a suggestion. At first, he thought it would be just like if he stirred honey to peanut butter.

“When you put the peanut butter into that honey that is being creamed when it goes through that process, it changes that flavor,” Wyatt said. “It is really remarkable the change that takes place.”

The flavorings are added at the beginning of the creaming process. All the ingredients are combined using a stand mixer.

The mixture is then put into jars and kept at 45 degrees for up to three weeks for the crystallization process to be complete.

When Wyatt’s honey is creamed, it is thick enough to flip the jar over without spilling it.

The best time to harvest honey is when 75 to 80 percent of the cells in the hive have been capped by the bees in spring and in September. When bees cap the honey, it means that there is the optimal amount of moisture in it.

It is summer time, which means local residents and tourists are looking to enjoy the outdoors. The Chilton County Commission... read more