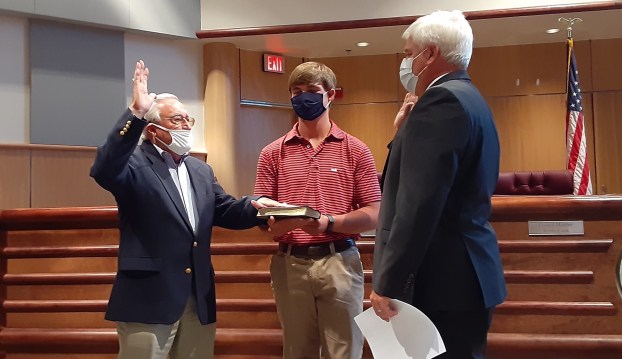 Bobby Cook is sworn in as mayor of the City of Clanton. (JOYANNA LOVE/ADVERTISER)

Clanton Councilman and Mayor Pro Tem Bobby Cook was sworn in as mayor to fill the remaining term of former Mayor Billy Joe Driver during a meeting on July 15.

Driver died on July 9 after being hospitalized with COVID-19.

Cook commented that while Driver had been one of the longest serving mayors for the city, he would be the shortest. Cook’s term will be about four months as a new mayor will be elected as a part of the already scheduled municipal elections. Candidates can qualify between now and July 21 at 5 p.m. The election will be held on Aug. 25.

The Council passed a resolution that the position of mayor was vacant and selected Cook to serve. Cook announced that his seat on the Council would remain vacant until the election.

“This is a sad occasion for all of us because we are taking some actions that are going to be taken today because of the untimely and sad death of a man that we admired and respected and worked for, for many years,” city attorney John Hollis Jackson said.

Jackson said Driver “always commented about how the City of Clanton needed to go on regardless” and would approve of the Council moving forward with selecting a leader.

The meeting was a sober affair as there were many reminders that long-term and beloved mayor Driver was no longer here to lead the business of the city.

“We are a community hurting right now,” Councilwoman Mary Mell Smith said. “… We need to lift each other up.”

She also emphasized the importance of prayer for the community with all that is happening. Matthew DeBord, pastor of First Baptist Church in Clanton, spoke a word of encouragement before opening the meeting in prayer.

While the Council was discussing the city’s bills, Cook updated the Council that Driver had previously approved increasing the quarterly contribution to the Chilton-Clanton Public Library by $5,000.

The Council approved the updated payment as well as paying bills to a new garbage transfer company and ACR Realty for work on the Dollar General lease.

The financial report made available to the Council showed sales tax revenue generated in the month of May from people shopping locally was at an all-time high.

“It is probably the largest check that we have ever received in the City of Clanton,” Cook said.

The Council heard community member concerns about speeding, sidewalks with grass growing through the cracks and the need for updated “children at play signage.”

In response to a request for speed bumps to be installed, Cook said it has been the Council’s policy not to install these because of the potential of damaging vehicles.

He said the sidewalks mentioned were on state roads, and he would contact them about needed maintenance.

The Council also hired an employee for the sanitation department and received an update on purchasing a Caterpillar equipment vehicle from the national bid.

Pitching a perfect game in baseball is a monumental accomplishment at any level of play. Cooper Gray of Clanton has... read more