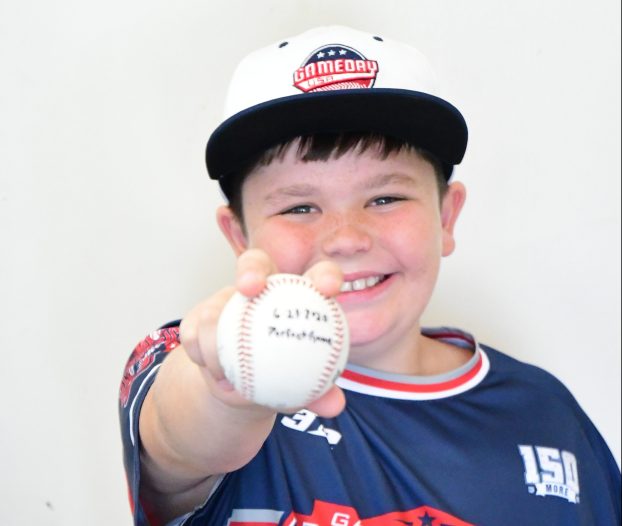 Cooper Gray got to keep the ball that was used to produce the final out of his perfect game. (Photo by Anthony Richards)

Pitching a perfect game in baseball is a monumental accomplishment at any level of play.

Cooper Gray of Clanton has now experienced the feeling of perfection firsthand after the 9-year-old pitched a perfect game a couple of weeks ago.

According to Gray, his coaches did not inform him of his accomplishment until after the game, which led to quite the surprise.

“I was thinking I might throw a no-hitter, but when my coach told me I threw a perfect game after, I got excited,” Gray said.

Gray had never thrown a perfect game or a no-hitter prior to the outing. A perfect game is when a pitcher goes an entire game without allowing a hit or a walk.

Even at a young age, Gray understands that without outstanding play from his defense behind him, the perfect game would not have been possible.

“I told them thank you,” Gray said. “My shortstop made a Derek Jeter play. He picked it up and piped it down to first base.”

He has played other positions in the field, but pitcher is one of his favorites. 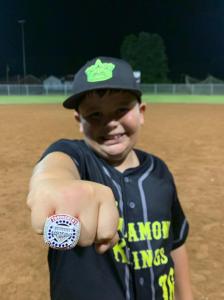 Gray’s perfect game helped his team win the tournament championship. Each player was awarded a ring for their accomplishment. (Contributed photo)

He tries to throw fast, which makes it tough for hitters to locate the ball.

“I don’t really think about the batter being in the box,” Gray said. “It’s just me and the catcher throwing.”

Basketball, soccer and football are some of the other sports that Gray has given a go at over the years.

However, baseball is where his passion truly lies.

“I don’t really know what it is, I just got the hang of baseball better than I did the other sports,” Gray said.

Hitting is another one of Gray’s most enjoyable parts of the game, which also explains why his favorite major leaguer is Aaron Judge of the New York Yankees.

Gray got to keep the baseball that was used to get the final out of his perfect game. A keepsake that is sure to spark memories for years to come.

Branden Evans and Cole Atchison have been the best of friends since seventh grade and that bond will now carry... read more