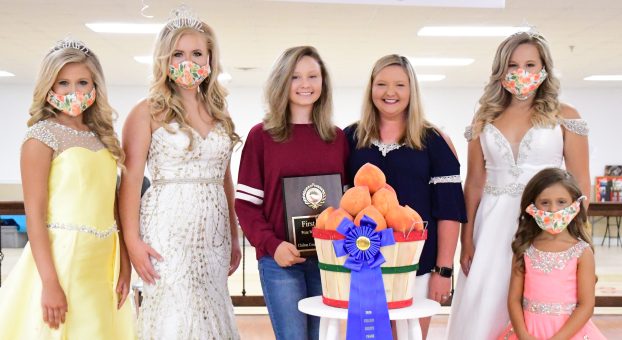 Melissa and Andrea Knight stand with the Chilton County Peach Queens after accepting the winning plaque on behalf of M&M Farms who were selected with the honor of top peach at the 2020 Peach Auction. (Photo by Anthony Richards)

The 2020 Peach Auction took place July 10 a couple of weeks later than usual due to the pandemic.

However, just having the event was a momentous occasion for the Clanton Lions Club.

“We knew we had to get it in this week, if we were going to have any peaches,” Clanton Lions Club member Glenn McGriff said.

It was a strange year for peach festivities with the auction and parade being the only usual Peach Week events not to be cancelled.

The 2020 version of the Peach Auction, looked a little different and was not even an actual auction, as no money was exchanged for any of the baskets.

Instead, the Lions Club decided to judge the baskets and then donate each of them to members of the community that have provided a helping hand during the pandemic.

This will include healthcare workers, law enforcement officers, and several other first responder-type organizations.

“We knew that we couldn’t put a burden on our residents, but we still wanted to do what we could to recognize our peach growers and our local heroes,” McGriff said.

The 2020 winning basket belonged to M&M Farms with Mark and Melissa Knight. His daughters Andrea and Alissa Knight were present to receive the winning plaque.

“It’s a blessing and we’re thankful to have had a good year,” Andrea Knight said.

The top peach was a Paul Friday variety of peach named PF 24-007.

According to Andrea Knight, they grow various Paul Friday peaches, but the PF 24-007 is one of their favorites, because it is a type of peach that naturally grows very large. 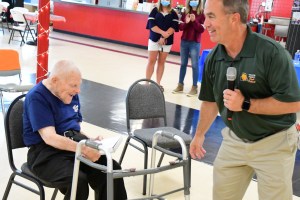 “My dad is recovering from cancer right now and that’s why he couldn’t come,” Andrea Knight said. “He actually got to pick them [peaches in winning basket] and he’ll be really excited.”

Clanton Mayor Billy Joe Driver’s death one day before the Peach Auction, prompted the Lions Club to dedicate the winning basket to his family.

“It meant a lot to them,” McGriff said.

Driver usually gave the welcome statement at the start of the auction.

“You never knew where he was going to go with it,” Judge Chris Speaks said, as the crowd chuckled and remembered Driver’s ability to light up a room.

Although no pageants were held this year, a photogenic contest did take place with a large amount of people submitting photos of children from all ages.

Eight growers entered a total of 15 baskets of peaches for the auction.

According to McGriff, although no prize money was being handed out this year, the growers were still quick to offer up their peaches.

“The growers have been good to us and we try to be good to them,” McGriff said.

According to McGriff, 2020 was not the first time the auction had been pushed back to July. It was also rescheduled about 24 years ago due to the peach production having a very lean year.

“The last week in June is the ideal time,” McGriff said. “We won’t be back in July unless we have to.”

Donny Martin was surprised by being named the 2020 Peach Parade’s grand marshal during the auction.

In September Martin will celebrate his 60th anniversary as a member of the Lions Club.

“One of the oldest Lions Club members in the state of Alabama,” McGriff said. “His daddy was the first Clanton Lions Club President. How many people do you see that have been a member of an organization for 60 years? It just doesn’t happen.”

Chilton County Schools campuses and offices have been closed through July 20. A few schools have announced the closure on... read more