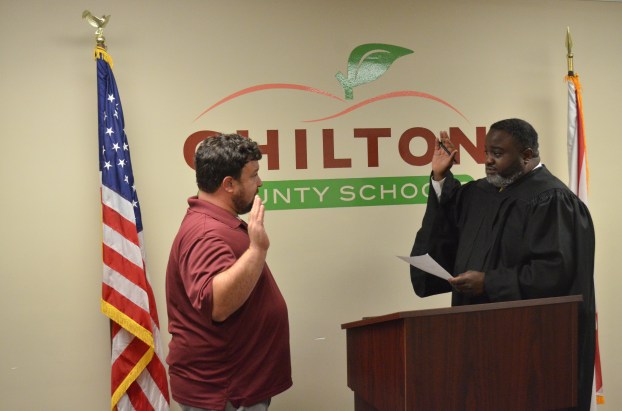 Brad Carter is officially sworn in as a member of the Chilton County Schools Board of Education by Circuit Judge Bill Lewis on June 30. (Photo by Anthony Richards)

Carter sworn in as Board of Education member

Brad Carter is officially a member of the Chilton County Board of Education following a swearing-in ceremony June 30.

He was sworn in by Circuit Judge Bill Lewis and the ceremony took place in the meeting room at the Board of Education building in Clanton.

“I really just saw it as an opportunity to serve the county, the kids and the school staffs,” Carter said.

Carter has two children that are enrolled in Chilton County Schools.

“I have two huge interests in the school system,” Carter said.

Carter fills the vacancy left by the departure of Brian Jackson.

It is a unique circumstance taking over in the middle of term, but Carter believes he is mentally prepared for the challenge at hand.

“It is an odd time to come in, but I grew up volunteering with my family raising me to help those all around the county,” Carter said.

He has been tuned into the board meetings when they have been broadcast online, so he is familiar with the many of the typical procedures involved.

Several of Carter’s family and friends attended the ceremony, which meant a lot him. 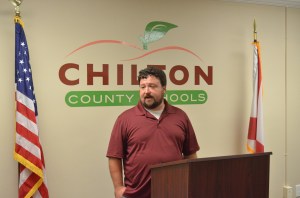 Brad Carter is the newest member of the Board of Education. He fills the seat previously held by Brian Jackson. (Photo by Anthony Richards)

“It was a little bit overwhelming,” Carter said. “I really want to thank Judge Lewis for coming down, because he made a special trip. These are people that I’ve known for a long time.”

One of those longtime friends was Superintendent Jason Griffin, who was on hand to introduce Carter to the podium and welcome him along with many other board members.

According to Griffin, Carter was actually a student of his back in the day.

“He’s always been an outgoing individual concerned about the community, and he continues to be,” Griffin said.

Over the years, Carter has held leadership positions in various other organizations throughout the county, including the Chilton County Chamber of Commerce.

“I suspected that he’s been wanting to something more for his community and this was it,” Griffin said. “It works out good for him and for us [school board].”

The talk of improving broadband capability in Chilton County has picked up in recent months and has been diagnosed as... read more