Construction has begun on the bathhouse and pavilion at Minooka Park’s campground. (Photo by Anthony Richards)

Renovations to Minooka Park’s campground are moving right along once again following a period of interrupted progress due to the coronavirus pandemic.

Several different projects are in the works, including the construction of a pavilion and bathhouse as well as the addition of several camp sites.

According to Commissioner Steve Langston, when he began overseeing the project in November 2019, the park had 18 camp sites with only 10 full hookups, providing campers with water, sewer and electricity.

The other eight sites were not hooked up to sewer, which has since been rectified.

Langston’s goal for the park is to have “a clean, well-groomed campground area.”

“This is going to be something that the people of this county can be proud of,” Langston said.

Since sewer is now offered at each site, Langston stated that Minooka Park has seen an increase in the amount of calls and outside interest about the park. 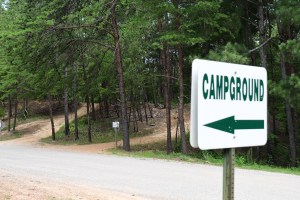 The wooded area at the campground entrance will soon be home to basketball and volleyball courts. (Photo by Anthony Richards)

He expects that interest to pick up even more once the second phase of renovations is complete.

The second phase is underway and involves adding 19 more full hookup sites and five sites with just water and electric available. The increase would bump the campground’s total to 42 sites.

Improving amenities for those staying at the campground is also a priority for Langston, who has plans to add a playground area, horseshoes, cornhole, an archery range and basketball and volleyball courts.

The courts will be away from the camp sites, so that the noise of bouncing balls does not disturb the other guests.

“If you’re a family with young kids or teenagers, there was nothing for them to do,” Langston said.

According to Langston, the park only had four swings for campers to use prior to the plan to add extra amenities.

Minooka Park is roughly 420 acres and will continue to have about 35 miles of trails and a lake for fishing for its guests.

Langston hopes to have the entire renovation completed by October but also understands that delays can always arise with any project.

The Chilton County Commission approved a resolution to contribute $39,000 toward a countywide broadband feasibility study. The Commission joins the... read more