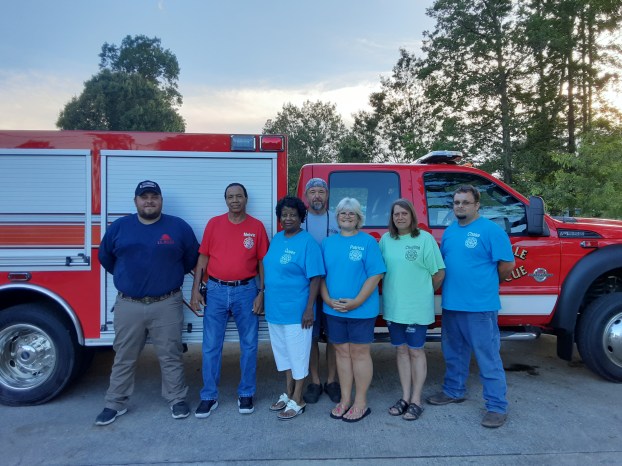 Many members of Maplesville Volunteer Fire and Rescue have served with the department for several years.

Maplesville Fire as close as family

Many of the members at Maplesville Volunteer Fire and Rescue have been with the department for several years.

Each has a unique story of how they came to join the family.

For Christine Epperson, it was having to call the department for a grass fire that led to her joining.

Someone made the statement “Now you have to join the fire department.” Whether they were serious or not, Epperson did join and has been a part of the department ever since.

Epperson is now the EMS chief and helps make sure the volunteers stay up to date on their training.  She has served in the department for 26 years.

An emergency also led to Assistant Chief Aubrey Latham being signed up to join. In 1982, he had been on the scene of the Dallas County High School fire because he worked for the gas company. The Maplesville Fire Chief at the time asked him to come help with a hose after he turned off the gas at the site.

“The next morning at work, he brought me an application and he said ‘fill this out. You’re now a member,” Aubrey Latham said. “I have been here ever since.”

In those early days, he said there was “an adrenaline rush” while serving the department but now the ability to be the one who can “come get a truck” to help the community and his family is what has contributed to his longevity with the department.

He has been with the department for 38 years.

Queen Morrow described him as “someone who knows everything there is to know about this fire department.”

Even members who have been a part of the department for several years go to Aubrey Latham when they need advice.

Aubrey Latham was chief of the department for 16 years.

“That wisdom is still there and we still benefit from it from him and Melvin (Morrow),” Queen Morrow said of Latham and her husband.

Melvin Morrow has led the department as chief for the past three years, but his

“We have a lot of medical history in my family,” Lt. Carson Riley said. “About three years ago, my granddaddy had a bad spell. He has real bad COPD, and it was just every week occurrence having to call Rescue.”

When Riley was old enough to join, he put in an application.

“I have loved it ever since,” Riley said.

Training is crucial to the department being ready to respond. Riley said this includes some medical training.

He has been with the department for two years.

“He has been eager and willing and answered many, many calls, whatever needed to be done,” Patricia Latham said.

“Kevin Davis was instrumental in getting me to become a member here,” Queen Morrow said. “He trained us a lot at (station) 1400.”

Then Kevin’s training rubbed off on Christine.

“She became the trainer of trainers at station 500,” Queen Morrow said.

All of the Maplesville Department’s training is done inhouse.

Capt. Chase Anderson’s interest in the department came in an unusual way. He and some friends got speeding tickets one summer.

“We had to do community service and a lot of our hours were spent over here, washing trucks and doing stuff around the fire department,” Anderson said.

Those community service hours led to Anderson joining the department as a volunteer firefighter. He has now been a member of the department for 14 years.

Volunteers respond to calls that come in when they are available.

Volunteering with the department does not always mean someone has to be willing and able to fight fires, Patricia Latham and Queen Morrow handle the administrative responsibilities and paperwork for the fire station.

“You can be selective what you are comfortable with,” Patricia Latham said.

Patricia Latham said she joined the department because of her husband Aubrey Latham.

“When I had to come meet his family, this is what he was talking about,” Aubrey Latham said.

Others have also joined the department because of family members. The Morrows’ son joined and was an assistant chief for a while “and did a good job,” Queen Morrow said.

Perhaps part of what makes the department so close is efforts to spend time together just for fun at least once a year.

On average the department will respond to 15 to 20 calls in a month. However, Anderson said he remembers one month last year when they ran 37 calls in 30 days. In the summertime, grass fires account for many of these calls.

The department will also allow those under 18 that are interested to come to the fire station and help out around the building as a part of its cadet program.

Epperson said those in the program can also participate in some of the training exercises. She said this helps them want to be a volunteer when they are old enough.

Isabella High School hosted its 2020 graduation ceremony at Bill Nabors Field June 12, in what turned out to be... read more