Lindsey Wood has been a driving force as a member of the Thorsby Beta Club over the years and was recently recognized for her hard work.

The senior received the John W. Harris Leadership Award, which is an honor presented by the National Beta Club to only 10 of its members annually.

Being chosen as one of five senior Beta Club members nationwide is something that Wood is highly grateful for. Another five were selected from the junior Beta Club ranks.

“It was a surprise to me,” Wood said.

She served as Thorsby’s Beta Club president during the past school year and was a member of junior Beta Club prior to high school.

Looking back, Wood is glad that she made the decision to join the club. 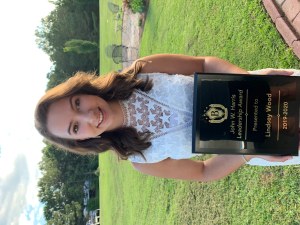 “I had a lot of older friends, and they were really involved in the school,” Wood said. “It made me want to be a part of it as well.”

Volunteering has always had a special place in Wood’s heart, and she is able to feed that passion through various Beta Club initiatives.

“We do a lot of drives during the school year,” Wood said.

The Thorsby Beta Club projects are usually a pair of blood drives and a pet food drive.

However, new ideas are always being tossed around, including a drive to gather clothes for homeless shelters.

As president, Wood was able to see the initiatives from an entirely new perspective.

“Being on the side of leadership made me see how much work actually goes into making it happen,” Wood said. “It has all come full circle.”

Another important aspect of leading is making sure that a good working relationship with other clubs at the school is maintained.

“We like to get involved with other clubs to promote Thorsby,” Wood said.  “We’re always discussing how we can get students involved.”

An abundance of emotion filled the faces and words of those in attendance during Thorsby’s Class of 2020 graduation June... read more