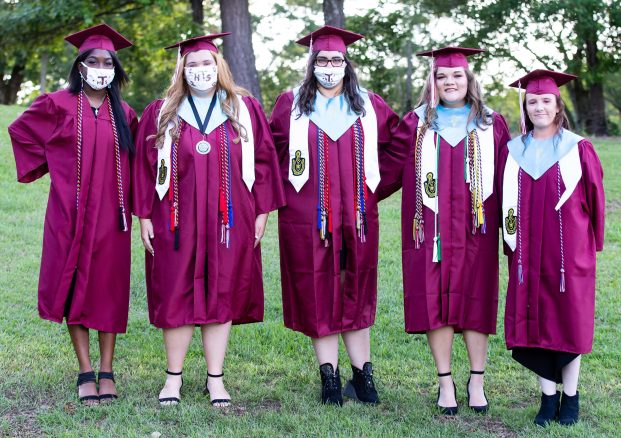 An abundance of emotion filled the faces and words of those in attendance during Thorsby’s Class of 2020 graduation June 11.

According to Thorsby Principal Corey Clements, some of the emotions he felt when writing his speech included frustration, anxiousness, sadness and excitement.

“I don’t know why we have to live through such times, but I know God has a reason,” Clements said.

The range of emotions was brought about due to the school year being cut short due to the coronavirus pandemic and with it many senior-specific events and traditions.

However, the timeless tradition of receiving your diploma in front of loved ones carried on despite having to be rescheduled.

Salutatorian Brady Watson quoted “Talladega Nights: The Ballad of Ricky Bobby” and Will Ferrell’s character when he said “If you ain’t first, you’re last.”

Watson quickly followed it up by telling his fellow classmates that quote was just not the case on that night.

According to Watson, everyone on the field was a winner, because each one of them would have the opportunity to walk across the field and receive the diploma they had earned.

“The first chapter has gone by fast, just as our parents said it would,” Valedictorian Madison Fulmer said.

Fulmer also quoted Clements’s mantra of “be kind, work hard and make good choices” one last time to the class.

The ceremony was held at Susan Bentley Field instead of the auditorium as a pandemic precautionary measure.

Tickets for the event were also limited, but that did not stop a handful of spectators that watched the proceedings from a house roof across the street from the field.

Such determination was an example of the fighting spirit portrayed in the Thorsby community and by the Class of 2020.

Clements thanked all those in attendance who have provided support for the students and the school over the years and through the tough times.

Chilton County Schools Superintendent Jason Griffin and board member Chris Smith were on hand for the ceremony.

Sixty-seven seniors graduated as part of Thorsby’s Class of 2020.

“You will always have a home here,” Clements said.