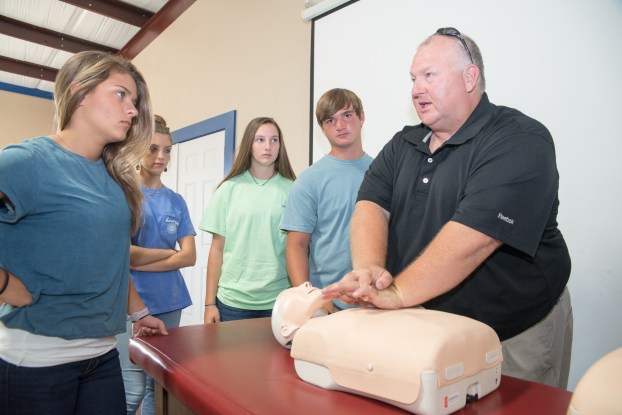 Barry Baker teaches his sports medicine class at CCHS. The AHSAA named him the 2020 Class 5A “Making a Difference” award winner. (File photo)

Baker continues to ‘make a difference’

For the past 25 years, Barry Baker has been giving back to the people of Chilton County with sports medicine needs.

His dedication to his hometown community led the Alabama High School Athletic Association to name him its 2020 Class 5A “Making a Difference” award winner.

Baker has served as the athletic trainer for Chilton County High School and Clanton Middle School.

“I was extremely honored to have the opportunity to be selected,” Baker said.

He is a CCHS alumna and returned to the place where it all started after graduating from Troy University.

“With my particular training, I could have gone a lot of places,” Baker said. “This is home.”

According to Baker, his parents also graduated from CCHS and his dad can still be found working as part of the chain crew on the sidelines of Tiger football games.

“I appreciate the [Chilton County] school system for allowing me to do this,” Baker said. “We’ve been able to help many people along the way.”

Since Baker was a young boy, he had dreams of playing in professional sports one day.

“However, after you get in high school, and you’re a certain height or speed, you realize you’re probably not going to make it to that level,” Baker said.

Fortunately, he was able to find a career that still allowed him to be around his passion of sports on a daily basis.

As part of the job, Baker has established relationships with an array of players, coaches and parents over the years.

According to Baker, getting to better know the people he works with is one of the most rewarding aspects of his job.

“After 25 years, you can’t go anywhere without running into someone who you’ve helped or given advice to,” Baker said.

He has had a first-hand account of the resilience that student-athletes have shown as they bounce back from injuries suffered during their athletic careers.

“There’s nothing better than watching a kid return from an injury to get back on the field or court,” Baker said.

Another way that he has chosen to make a difference is by teaching a sports medicine class at CCHS for the past three years.

Baker volunteers his time as a trainer at CCHS, while his primary business is helping oversee Cornerstone Fitness & Wellness in Clanton.

“Hopefully, we can train up the next generation,” Baker said.

Pico Kohn’s tremendous ability on the pitching mound continues to get noticed. The Chilton County High School junior has been... read more