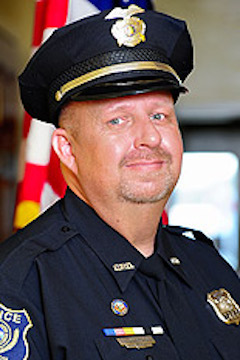 lately in the world nationally and locally,” Childers said in a letter to The Clanton Advertiser on June 3. “He did not have to do that. This is the type of thing we as a collective should be promoting throughout our city and on social media versus all the violence and vandalism.”

A Facebook post that Childers made about the prayer has been shared more than 350 times and viewed at least 9,000 times, she said. Above her short video clip, that shows Cpl. Jay Edwards in the distance, Childers posted “Facebook family, I have just witnessed the most amazing thing! Clanton Police Officer praying for our community! Now this is the type of things I like to see versus vandalism. It’s time to come together Westend!! I love you all #Makethisgoviral.”

The video did not pick up any of what Edwards was saying.

Childers said the moment “just touched my heart.” She was so moved that she contacted the Clanton Police Department to express her appreciation for Edwards.

“I went to the City and had a conversation with the Chief Maddox to let him know the good deed Mr. Edwards had done, I felt it needed some type of recognition for such a selfless act of kindness and concern for our community,” Childers said.

Edwards was standing at an intersection of two main streets in the neighborhood, just taking a few moments to pray for peace in the community. In a phone interview, he said he had no idea anyone was watching. His first hint that someone had tried to record the moment was when a friend asked if Childers post might have been about him.

Edwards has been an officer with the Clanton Police Department for the past six years mostly on the night shift. As a patrol officer, he drives through many areas of the city with West End being just one of them.

“You have the riots and all that were happening (in other parts of the country), and you still have people dealing with the pandemic stuff that is … lingering,” Edwards said. “I am a man of prayer. I put my complete faith in God, and He put on heart that I needed to go to West End and pray for the community. I do what God tells me to, so I drove over there.”

There were only a few people out and about as Edwards prayed “for peace and calm and understanding, not just for West End of course, but for everybody. In the end, we are all God’s people. I think God comes through in situations like this as long as we are willing to let him.”

Prayer is a normal part of Edwards’s day.

Although he did not seek it, Edwards said he was grateful for Childers recognition.

Edwards has worked in law enforcement for 23 years.