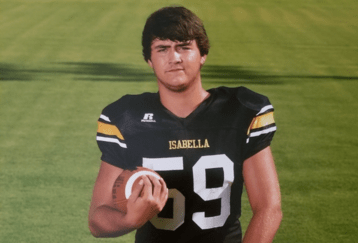 Isabella junior lineman Kaleb Brasher has been hard at work preparing for what he hopes will be an important senior season on many levels.

One of his goals heading into next year is to perform well enough on the field and in the classroom to land an offer to play college football.

Part of the recruiting process includes a player getting their name out there in order to catch the attention of college coaches.

Brasher has turned to social media to help accomplish this by posting videos of himself training and highlight packages via Twitter.

Another way to get one’s name out to the coaching world is by attending various camps during the summer that are designed to showcase and hone skills for certain positions.

Brasher was recently invited to take part in the 2021 Hawaii Tiki Bowl, which is an annual national all-star game for high school seniors played at Aloha Stadium in Honolulu, Hawaii.

Despite not being sure if he will accept the invitation, Brasher appreciates the offer and is grateful for the interest he is getting.

According to Brasher, playing college ball has been a dream of his ever since he began playing at about 7 years old.

“It’s been something I’ve wanted to do since day one,” Brasher said.

His entire football career has been spent along the defensive and offensive lines. 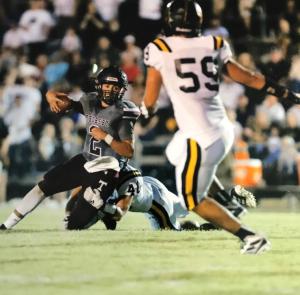 “Once you’ve played a position for a while, you start to get very comfortable,” Brasher said.

Although he was a key cog in the Mustangs’ success last season, including being a disruptive force in the opponent’s backfield, he understands that there is still a lot of room for growth.

Improving speed and strength has been his primary focus so far this offseason.

His routine involves working out every day at home and doing cone drills to improve his quickness off the snap.

At 6 feet 4 inches tall, Brasher has good length to play at the end of the line on both sides of the ball.

However, he has always been considered undersized when it comes to his weight.

According to Brasher, he weighed 190 pounds heading into last season and is currently up to about 240 pounds.

“It’s all about eating and working out a lot,” Brasher said. “But, you have to make sure you eat the right things.”

Brasher’s goals for his final high school football season include increasing his tackle and sack totals from a year ago and winning a state championship.

“You get what you put into it,” Brasher said. “It’s all about going out on top.”

Jacob Lockhart and Tucker Patterson exemplify what it means to be a Thorsby baseball player. Both seniors were often times... read more