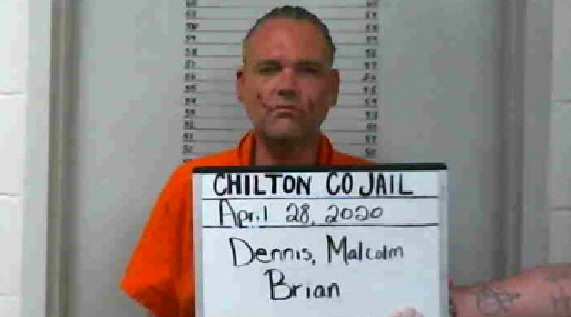 The COVID-19 pandemic may be claiming the lives of infected patients around the globe, but in a twist of fate concerns about the virus may have helped save a Verbena gas station clerk.

According to Chilton County Sheriff John Shearon, CCSO received a call about a shooting at the Texaco on County Road 59 near I-65 Exit 200 in Verbena April 28.

Shearon said the suspect, Malcolm Brian Dennis, 41, had allegedly been harassing a particular female clerk at the gas station as well as some other employees, including some prior incidents of trespassing at the location, but this was the first incident of this extent.

Shearon said on this particular night Dennis allegedly entered the back door of the building and headed for the counter towards the clerk while another lady was inside paying for her gas.

“This guy comes up and fires a round at the glass at head height at (the clerk),” Shearon said. “The glass deflected the bullet and shattered it, but some shrapnel hit the customer in the hand, though it only caused minor injuries. No one went to the hospital or anything.”

Shearon said Dennis then fled the scene, and deputies went to his house to arrest the suspect, but he was not there.

Shearon said an investigator went back to the scene later and found Dennis was either at his place or a nearby neighbor’s dwelling.

“He tried to flee in his vehicle, but it was slow speed so they blocked him in,” Shearon said. “He threw the weapon out the window as he was being followed. He was taken into custody without incidence.”

Shearon said he has worked multiple burglaries over the years at similar convenience stores where protective barriers and doors were left open, but given the concerns with coronavirus these days things are being left properly closed.

“The glass saved her, thank goodness,” he said. “If there wasn’t any glass she would have been dead. People are crazy nowadays. You don’t know what people are going to try to do. Thank goodness the clerk and the other lady were fine.”

He has been charged with attempted murder for shooting at the clerk and with aggravated assault (first degree) with a gun for the bullet shrapnel that struck the customer.

He was initially given a $15,000 bond for each offense, but since he was violating probation for a separate previous offense, those bonds have been revoked.