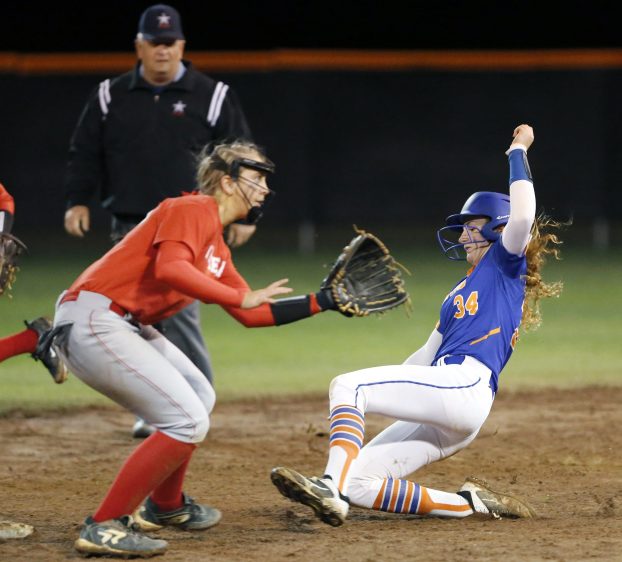 CCHS sophomore Marlie Giles ranked among the top 10 in the nation for home runs and RBIs according to Max Preps prior to the season’s cancellation. (Brandon Sumrall/Special)

Chilton County High School softball player Marlie Giles was on a tear at the plate prior to the season being canceled due to the coronavirus pandemic.

In the 16 games the Tigers played, Giles ranked among the top 10 in the nation according to Max Preps in both home runs and RBIs.

“It puts a smile on my face to see my name on the same list as other great athletes throughout the country,” Giles said. “Hitting a softball is one of the hardest things to do.”

With nine home runs and 34 RBIs, the sophomore was on pace to out produce freshman season, which ended with her being named The Clanton Advertiser’s 2019 Softball Player of the Year.

The stats she produced were done so in 59 plate appearances, which meant Giles averaged hitting a home run about every six at-bats.

“Getting to where I am is a combination of God-given talent and hard work,” Giles said. “I’m blessed with my abilities, but you’ve got to have both to succeed.”

Giles was only four home runs shy of surpassing the 12 she hit last season. She had already sent more bombs over the fence than the eight from two years ago as an eighth grader.

Despite the increased power numbers, Giles’s approach at the plate continued to be calculated with each at-bat.

“As I’ve gotten older, my approach at the plate has improved,” Giles said. I’m not going up to the plate looking for a home run. I’m just trying to hit the ball as hard as I can and see where it goes from there.”

She even hit a couple of her home runs to the opposite side of the field, which was something she had not done in previous years.

Giles recently began working with highly-regarded hitting coach Lincoln Martin at his facility outside of Atlanta.

According to Giles, around Christmas they took the trip over to Georgia and hit for about two weeks.

She was able to see immediate benefits at the plate during games, and as a result, her batting average was also up.

The cancellation of the season hit Giles hard, but it was especially emotional when she started thinking about the seniors on the team.

“We were all really close to all of our seniors this year,” Giles said. “I think I’ll definitely appreciate everything I get to do from here on out. I don’t want any regrets, and this year proved that you never know when it’s going to end.”

Since the offseason has unfortunately started early this year, Giles is already eyeing the goal of making it to the first state tournament in the history of the CCHS softball program next year.

Belle Richardson is only about to finish her freshman year of high school but already has a college offer to... read more